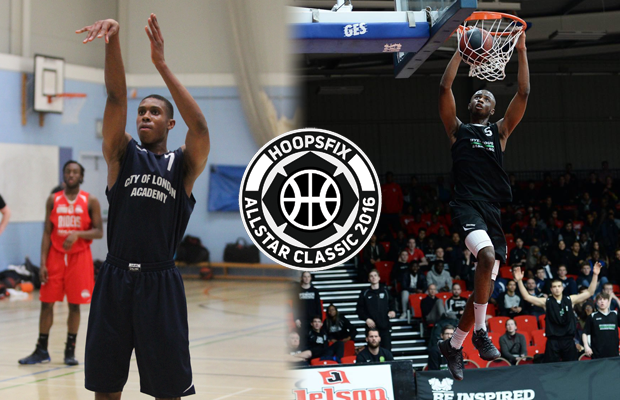 The rosters for the 2016 Hoopsfix All-Star Classic Under-19 game have been revealed, featuring some of the best 1997 and 1998 born players in the country.

All four of the country’s Under-19 Players of the Year from the EABL and ABL will suit up on Sunday June 5th in Brixton, in a contest brimming with talent (buy your tickets now!).

Five players from City of London Academy/Peckham Pride have been selected to suit up, a testament to their perfect season in Under-18 National League, and Final Four appearance in the EABL. Wake Forest commit Sam Japhet-Mathias, fellow big man Solomon Iluyomade and athletic wing Amin Adamu, and last year’s Hoopsfix All-Star Classic U17 MVP, Gedi Juozapaitis, will join Walters in the game.

The remaining members of the East Conference All-EABL team will all be playing. Itchen’s key guard Ben Maranan, Oaklands’ Evan Walshe – who also picked up U18 NBDL Final MVP a fortnight ago, EABL leading scorer James Lloyd, and Barking Abbey’s Obi Agu, who has had some impressive games in NBL Division 1 this season with Kent Crusaders, will all be spread across Team Black and Team White.

EABL Final Four team Itchen College also have forward Dan Hemingway adding firepower to Team White, where he will be joined by England U18 point guards Luke Mitchell and RJ Eytle-Rock, who will combine to make the Team White backcourt.

Team Black will be boosted by EABL Championship side Charnwood College’s point guard Andre Arissol – also the Division 2 Patrons Cup Final MVP, and England U18 big man Henri Langton, while fellow England U18 and Angelico Biella rising star Carl Wheatle will be flying back from Italy to return to the Classic after a year hiatus.

In a testament to the level of talent suiting up on June 5th, seven of the players have already signed scholarships to head to the US, with a number of others expected to sign in the coming weeks.

Tickets to the 2016 Hoopsfix All Star Classic are still available but selling fast, starting at just £6. Click here to buy now before they are all gone!

2016 Hoopsfix All Star Classic U19 Rosters

Under-17 rosters and coaching staffs for all teams will be announced in the next fortnight.