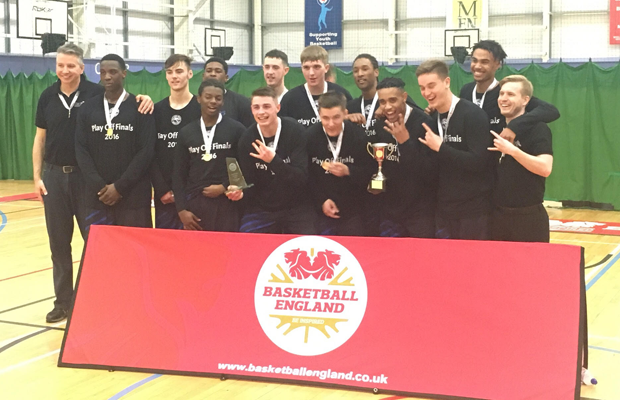 Oaklands College Wolves claimed the 2016 Under-18 NBDL Playoff crown with a 76-68 win over Chelmsford Lions on Sunday at the Amaechi Basketball Centre.

Lions let it be anything easy for the Wolves, always remaining within striking distance; pulling within three with just over 3 minutes remaining in the contest, however Oaklands kept their cool to pull out the win.

Evan Walshe was named MVP, as he finished with 24 points on 10 of 17 shooting. George Pool finished 12 points for Oaklands, with Obi Egbunike, Dominic Scott-Robinson and Nathan Ramsdale-Owen adding 11 each.

“It’s been so much fun coaching this set of guys, the championship is testament to how the players can win in multiple ways,” said Oaklands Head Coach Lee Ryan.

“All our guys were ready to play and so many had a hand in the result. The players have enjoyed themselves all year, we compete on a number of fronts so this one was a chance for the guys to express themselves and just play with freedom.

“The result is a big one for the club in its first full year fielding all junior teams, I’m sure it will be a launch pad for more to come from the Wolfpack! I want to credit Chelmsford who kept coming back at us in the final, on multiple occasions it looked like we would pull away yet they would come back again and again, with another energy play or someone off the bench stepping up, they have a bright future ahead and certainly made us earn the title!”

“Evan fully deserved his MVP, he’s had a great couple of years with us and proved he has all the makings to be a top player.”

Chelmsford were led by 15 points and 10 rebounds from Tom Chadwick, with Fin Mustafa adding 14 points and 14 rebounds.