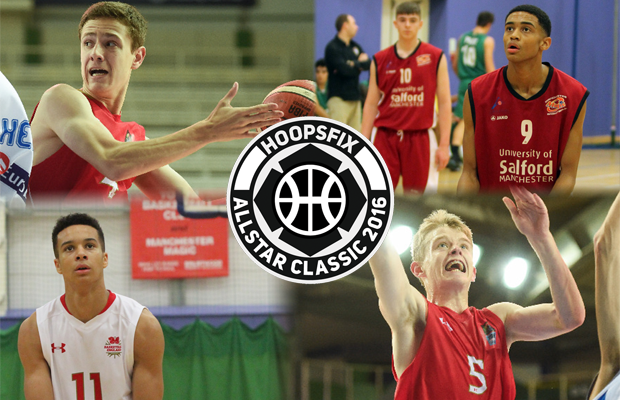 The rosters for the 2016 Hoopsfix All-Star Classic Under-17 game have been revealed, featuring some of the best 1999 and 2000 born players in the country.

Manchester Magic’s Under-16 championship winning side will feature three players, with England Under-18 Kaiyem Cleary, this year’s Playoff Final and Cup MVP Michael Anumba (plus the youngest player to suit up in Men’s NBL Division 1 this season), and talented scorer Alex Roberts all earning selection.

England Under-18, Zion Tordoff, who was a key part of Myerscough’s EABL runner up team, will return for the second straight year, along with England U18 teammates Micah Savery-Richards – an athletic guard from Leeds, Lewisham’s long armed slasher Josh Edwards, and Solent’s 6’8″ big man Ashley Briggs.

Westside’s athletic wing Kayne Henry-McCalla also makes the cut, joining Team White, having been a late call up to the England Under-18s after impressing during the season

The British-Spanish dual national Amabilino brothers, Brian and Adria, who have made an impression in their first year in the country with Derby Trailblazers, Brian earning a call up to the England U18s, as they both led their EABL squad to the playoffs and winning the U17 National Schools title, will take to the floor but face off on opposing teams.

England Under-17 guards Eisley Swaine – another of the youngest players in Men’s NBL Division 1 this season with Bradford Dragons, Joe Cummins – the stalwart of Barking Abbey’s offence this season, and Sesan Russell – a key part of Charnwood’s EABL championship squad, will all be representing on Team Black.

England Under-18 guard Cameron Bett, the England Under-16s’ second leading scorer last summer, will be flying back from the US to take to the court for Team Black – having departed this season to attend McCallie School.

Two of the three younger players to make last summer’s England U16 squad, in Jacob Round from NEBC Titans – England’s third leading scorer, and Daniel Ogoro from U18 NBDL runners up Chelmsford Lions will be looking to make their mark and they will join Peckham Pride’s Demilade Adenuga, a three time National Champion and standout at this year’s U16 Final fours, to round out Team White.

Tickets to the 2016 Hoopsfix All Star Classic are still available but selling fast, starting at just £6.Click here to buy now before they are all gone!

2016 Hoopsfix All Star Classic U17 Rosters

Coaches for all teams will be announced in the next fortnight. Click here to buy your tickets now!