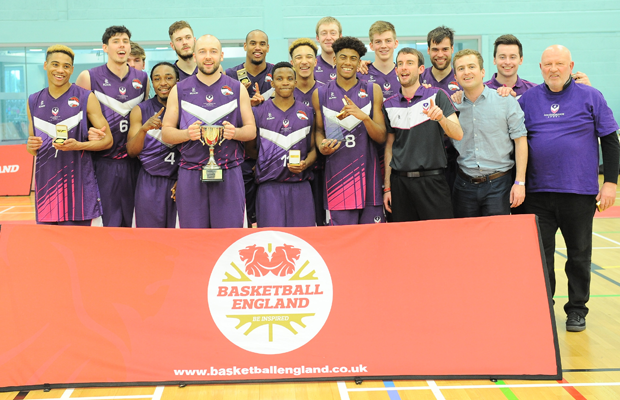 Raheem May-Thompson overcame early foul trouble to score 16 second half points, all in the third, and add nine rebounds, but it was Andre Arissol who earned the MVP award for his 13 points, four assists and four steals.

Will Maynard netted 15 points including a buzzer-beating three to end the half, while Harrison Gamble came off the bench to add 12 points and nine boards.

“Really pleased for the guys, they showed up on the day,” Loughborough Head Coach Mark Jarram said.

“Before the game we spoke about it’s 0-0; league record doesn’t mean anything, we gotta show up and we gotta get stops. They managed to do that, they managed to keep guys in front. We definitely had some mistakes but I’m really proud of them, we came through in the end.”

“Our mental state beforehand was knowing they were a good team, knowing we had to come out strong but the way we played defence, got stops and scores, did what we did, stuck to the plan and came out with the win.

“I honestly didn’t event expect the MVP award, I had to look down at my number (when it was called), but I’m happy, I’m glad all the hard work is paying off.”

Loughborough made a hot start making their first three shots of the game to take an early lead, and would hold on to a slender advantage to lead 19-17 after the opening quarter.

Loughborough then began to show their quality and soon established a double-digit lead with Maynard’s aforementioned buzzer-beater keeping the gap at 10 going into the half at 44-34.

May-Thompson began to take over in the third, scoring his side’s first 14 points in the quarter to help push the lead up to 14.

East London scored the first six points of the fourth to cut the gap into single figures, but an 11-0 response from the Student Riders quickly took the game away from their opponents and they went on to secure the title.