GB U20s at the European Championships - Looking Back on 10 Years - Hoopsfix.com

GB U20s at the European Championships – Looking Back on 10 Years 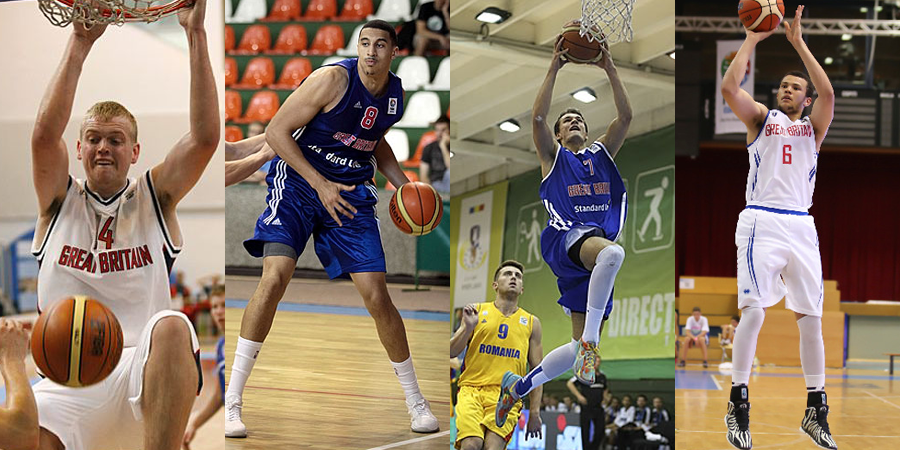 Great Britain have now competed at the Under-20 European Championships on ten occasions, since the National Team was formed in late 2005.

Many of the players that have represented the GB U20s have either made the step up from youth international level or gone on to play for the Senior Mens side with some even doing both.

GB achieved an historic promotion to Division A in 2013 after tournament MVP Devon van Oostrum led his side to a silver medal.

However, after two summers of battling the top nations in Europe, GB find themselves dropping back down to Division B after suffering relegation in Italy last Friday.

A total of 88 players have played for the GB U20s with 29 of those playing in consecutive summers while Devon van Oostrum is the only one to play in three U20 European Championships.

Jeff Jones was the first Head Coach chosen to lead the under-20’s and held the post for the first two summers before Tim Lewis took over from 2008-11. Dave Smart spent one summer in charge in 2012 and Douglas Leichner has been at the helm since, leading the team to their first promotion in his first year.

2006– The first GB U20 squad was assembled by Jeff Jones led by future GB Senior guard Paul Guede. They opened the tournament with a narrow 71-70 overtime loss against Ireland before heavy defeats against Belgium and Sweden followed. GB claimed their first and only win when they avenged the opening loss to Ireland with an 87-68 victory. 14th (1-7).

2007– After losing their opening game, GB bounced back with two wins in a row over Belgium and Romania to help them progress. Dan Clark and Guede combined for 47 points in the pivotal 79-62 victory in their final group game. However, they were unable to progress any further after losing their next three games. 8th (2-5).

2008– Tim Lewis’ reign got off to a winning start as GB beat Finland 90-73 with Orlan Jackman leading five players in double figures with 19 points. They failed to reach the next round after suffering three consecutive defeats. GB earned two comfortable victories over Ireland either side of Matthew Bryan-Amaning dropping 41 points in a tough loss to the Czech Republic. 15th (3-5).

2009– GB lost all three games in the opening round before picking up their first victory with a 62-56 win over Portugal, led by 16 points from Tyrone Treasure. Two more losses followed before GB claimed their second win as 20+ points from Will Neighbour and Andrew Lawrence helped their side past Hungary. 12th (2-5).

2010– Lewis’ side claimed two wins out of three to progress from the Preliminary Round after beating Belgium in the deciding game. GB beat Norway by 36 points behind Neighbour’s 24 points and 14 rebounds and they extended their winning run with two more victories only to miss out on the semi-finals in a three-way head-to-head. 6th (6-2).

2011– Narrow defeats against Portugal and Finland harmed GB’s hopes of progressing and they finished third in their opening group despite winning their final three games. Ryan Richards put up 32 points to edge GB past Israel, 83-82 as they went on to finish with four more victories, including two against Iceland and a 54-point win v Romania. 13th (7-2).

2012– A strong start was made under Smart with three straight wins to open the tournament which was enough to advance despite a defeat in their final First Round game. However, two defeats followed in the Second Round to end their hopes of promotion for another year. They edged out Belgium in overtime before being crushed by Poland. 6th (4-4).

2013– The Leichner era began in style with a confident GB team led by MVP Devon van Oostrum. The young guard scored 29 points in the opener and helped his side to a 5-0 start in the First Round. DVO then produced a 34-point haul as GB crushed the Netherlands in the last eight before securing promotion with a 70-61 success against Hungary. There was to be no gold for GB as they were beaten 83-71 by Poland in the Final despite having beaten them earlier in the tournament. 2nd (7-1).

2014– GB made the perfect start to life in Division A by beating Latvia by two points. The upset of the tournament came when Luke Nelson stunned Greece with a game-winning three in the closing seconds. GB advanced to the Second Round but came up short against European powerhouses Serbia and Spain. After losing to Italy, Leichner’s side finished the tournament in style by avenging an earlier loss to Slovenia with an 85-82 victory with 25 points from guard Nelson. 11th (3-6).

2015– An agonising overtime defeat against the defending champions opened the tournament and GB would lose their next three games to finish the First Round 0-4. Back-to-back wins against Croatia and Bulgaria kept their survival hopes alive, but GB were condemned to dropping back to Division B after losing an overtime thriller against Poland. GB again went out on a high after defeating Russia, who had beaten them a few days earlier, as Nelson recorded 26 points back-to-back. 15th (3-6).

For our extensive coverage of the GB Under-20’s, click here.