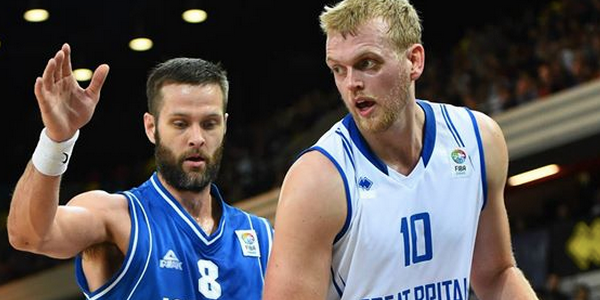 Dan Clark feels Saturday’s high-level test against New Zealand could act as something of a barometer for Great Britain.

The Tall Blacks sit 22nd in FIBA’s official world rankings – one place above GB – and are regulars on the world stage through qualification from FIBA Oceania.

Clark feels the aggressive and intense style of play that Saturday’s opponents are renowned for is something GB should aim to emulate, while also seeking to match New Zealand’s impact at world level, before potentially surpassing it in future.

“They’re a hard-nosed team, they play tough and play hungry. We are going to have to match their physicality and their intensity level throughout the whole game if we want to have a chance.

“They will be more experienced than us, they have been playing together for a long time and we have a lot of new guys this year.

“It will be a good test. It’s the type of team we should aspire to be like, although we could and potentially should be better than them.

“But at the moment, they are the type of team we should try and aspire to be.

“They are consistently in the FIBA World Championships and their continental championship and that’s the type of team we want to be and build from there.”

The starting point on Saturday will be to face New Zealand’s world famous Haka, which memorably stunned the United States team at the 2014 FIBA World Cup

It is a unique experience which Clark is relishing and one he and his team-mates will be ready for.

“It’s a bit different, something you don’t see every day. It’s a new experience and we will have to talk about how we are going to front it. We will see what we do.”

Clark is well versed in how things work at international level having added to his high-level club experience with regular appearances on the international scene since 2010. The same cannot be said for many of his team-mates in this new-look GB line-up, however.

Head Coach Joe Prunty has taken the opportunity to take a look at some fresh talent, allied with more experienced players such as Clark, Kieron Achara and Drew Sullivan and it has created an intriguing blend.

“It’s interesting with a lot of new guys,” said Clark.

“There is a lot of learning for the guys who have not played at international level before. For some it’s a bigger learning curve than others, but that’s what it’s about this year.

“We don’t have any big competitions so it’s about showing guys what it’s about and finding out who is ready to play at this level.

“There are a couple of guys from the under-20s I personally haven’t seen play before and it’s good to finally see them play and see what they’re about.”

One player from GB know almost everything about is Drew Sullivan. The talismanic captain makes his 100th appearance on Saturday, and having suited up alongside him for many of those battles, Clark is well placed to pay tribute to the centurion.

“Drew has been the programme for a numbers of years,” said Clark.

“He has been here day-in, day-out since day one, along with Nate [Reinking], who has gone onto the coaching side of things now, so it is a bit different for him.

“I have nothing but praise and good things to say about Drew, apart from being a good friend, he has been an amazing team-mate and it’s been a great experience to play with him.”