GB U20s Power Past Russia to Finish in 15th Place 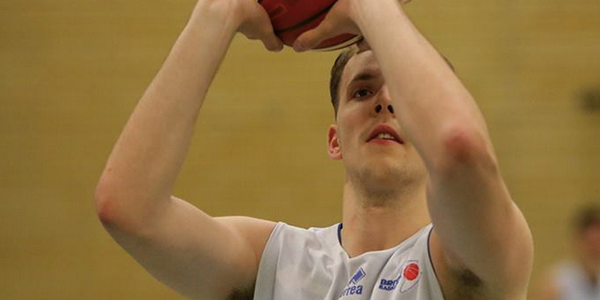 Great Britain under-20’s cruised to a comfortable 86-62 victory over Russia to claim 15th place at the European Championships, in Italy on Sunday.

Douglas Leichner’s side were already relegated after their overtime loss against Poland on Friday, but they finished the tournament on a high with a dominant way to sign off.

Captain Luke Nelson led the way with another impressive display as he racked up a game-high 26 points and dished out eight assists.

Ben Lawson added a tournament-high of 18 points, while Tamas Okros (pictured) made the most of a first start with 13 points and Kavell Bigby-Williams pulled down 15 rebounds to go with 8 points.

Nelson raced out of the blocks with GB’s first nine points before Okros nailed a 3-pointer to make it a 14-4 start.

Russia hit back and a 12-2 close capped by a late three gave them the edge at 21-20 after the end of the opening quarter.

A 12-2 run of their own put GB in control in the second as they asserted their authority to eventually lead 43-31 at half-time.

It was a case of more of the same when play resumed as GB went on a 10-0 run to stretch their lead with Okros again firing in from downtown.

An even finish to the third saw GB in the ascendancy as they took a commanding 65-45 advantage into the final quarter.

GB compiled another run of ten unanswered points with Lawson and Nelson continuing to add to the growing lead.

Nelson took his tally to 26 points and that would be his last involvement as both teams emptied their benches for the final few minutes of the game with GB prevailing as comfortable victors.

GB took care of the ball well and finished with an impressive 19-8 assist/turnover ratio whilst shooting at just below 50% from the field.

GB finish the tournament with a 3-6 record and will compete in Division B next summer.