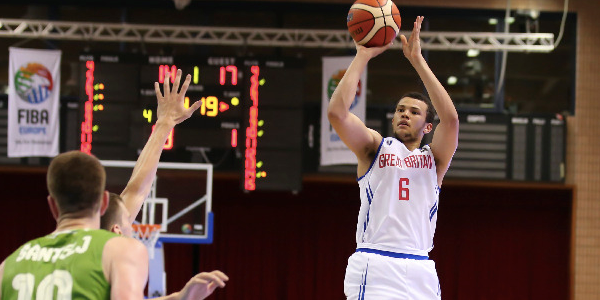 Great Britain under-20’s made it two wins in two days in Group G after easing past Bulgaria with a 77-51 victory at the European Championships, in Italy on Tuesday.

Douglas Leichner’s side followed up Monday’s victory over Croatia with a second win that further helps their chances of competing in Division A again next summer.

Captain Luke Nelson (pictured) led the way for his side with a game-high 17 points with Kavell Bigby-Williams and Jules Dang Akodo both adding 12 points apiece.

Bulgaria opened the game with the first five points before Nelson got GB up and running with a 3-pointer almost two minutes in.

GB soon levelled before taking control with a 10-0 close to the quarter that ended with Nelson beating the buzzer with another three to make it 24-16.

The run continued in the second for GB as they added another 13 points without reply – finishing with scores from beyond the arc from back-court duo Mo Soluade and Dwayne Lautier-Ogunleye – putting them up by 21 points.

Bulgaria finally snapped their scoreless streak but would still find themselves down 18 at the half with GB firmly in control with a 41-23 margin.

GB asserted their authority when play resumed for the second half with a 10-2 run to further increase their lead.

For the second quarter in succession, they managed to hold their opponents to just seven points with Nelson firing in back-to-back triples towards the end of the third to make it 57-30 prior to the fourth.

With the game already wrapped up, GB were able to run their bench with Aaron Menzies, Pharroh Gordon and Tamas Okros all getting on the scoresheet as all 12 players featured.

GB held Bulgaria to below 30% FG and out-rebounded their opponents 51-34 with Bigby-Williams grabbing nine boards and Ben Lawson adding seven rebounds to his three blocks.

GB finish their Group G campaign against Russia, and providing they finish in the top 2, they will then compete in the 13th-16th playoffs knowing that two wins would guarantee their Division A status.