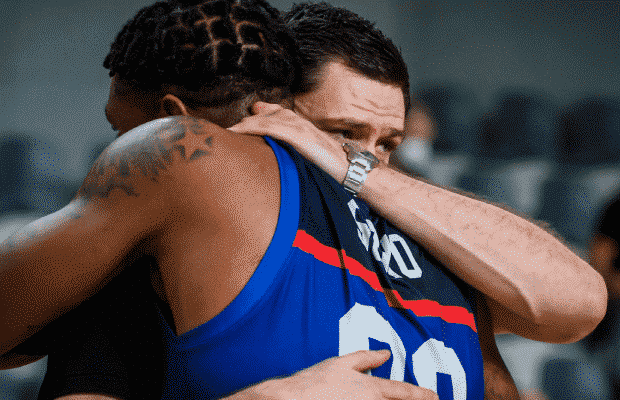 With 2021 drawing to a close, it’s time to reflect on the past 12 months as we pick out 10 memorable moments in British basketball in the men’s game.

GB marked their return to Europe’s flagship event as they enjoyed wins over France, Germany and Montenegro on their way to securing a second-placed finish in the group to qualify for EuroBasket 2022. Marc Steutel guided the team as acting head coach and GB will travel to Milan in September.

GB ARE HEADING TO @EuroBasket 2022!#BritishBasketball

London Lions made their belated European debut after having to pull out of last season due to COVID-19 regulations. Vince Macaulay’s side swept through the regular season with five wins from their first five games in the initial group phase to move into the second round. The Lions still have five games to play – including three at home at the start of 2022 as they aim to continue their journey towards the quarter-finals.

777 investment in the BBL

The BBL recently confirmed that 777 Partners have invested £7 million in return for a 45% stake in the league. The Miami-based private investment firm already own the London Lions and now turned their attention to the league in a deal being labelled as ‘a defining moment for the future of basketball in the United Kingdom’. One to watch in 2022.

Bene Martinkus went crazy in the ABL with a casual 109-point triple-double for Riverside. He added 10 rebounds and 15 steals, whilst knocking down 11 three pointers on 64% shooting overall (43/67 FG).

GB began their World Cup qualifying campaign with an impressive come-from-behind victory over Greece in Newcastle. Teddy Okereafor played a starring role in the win having made history by breaking the record with a 50th consecutive Senior cap for GB.

Solent Kestrels wrapped up a sweep of the spoils in NBL D1 action as they defeated Hemel Storm 93-62 to take the playoffs title behind a near triple-double effort from Ian Smith as MVP. The Kestrels also won another league title and were the winners of the inaugural L.Lynch Trophy.

Luke Busumbru with the exclamation point as Solent @SolentKestrels are PILING it on in the NBL D1 Playoff Final, now leading by 32! 🔥#BritishBasketball

Eagles triumph in May Madness

Newcastle Eagles had the last laugh on the season as they completed a season double with victory over London Lions in the final of the playoffs. The Eagles fought back to claim a dramatic 68-66 triumph with Cortez Edwards named MVP with an all-round display.

GB Olympian Dan Clark signed to play in the BBL for the first time after joining Manchester Giants for the current campaign. Clark has played a key role for the improved fortunes for the club and the Giants reached their first BBL final since their re-form and will take on Leicester Riders for silverware in the first month of 2022.

Kofi Josephs scored the most points by a British-born player in the BBl after firing in 46 points for Plymouth City Patriots against Manchester. The former GB Senior sharpshooter shot 58% from the field and also handed out eight assists in a memorable performance.

Three years in the making, the Clapham Common renovation was recently completed. The project that started in 2018 with Hoopsfix looking for a court to renovate, was picked up in 2020 under Foot Locker’s Raise the Game campaign in partnership with the NBA, Basketball England, and Lambeth Council.