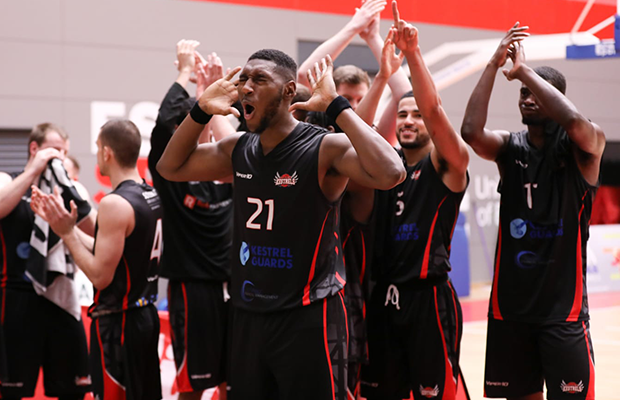 Solent Kestrels completed their dominance of NBL Division 1 Men this season, adding the Playoff title to their trophy cabinet with a dominant 93-62 win over Hemel Storm in Manchester.

They complete a treble on the season, with the league title and L Lynch trophy already secured, as Ian Smith was unstoppable to pick up MVP honours with 37 points, 11 rebounds and 9 assists on 11 of 19 shooting.

The final buzzer sounds as @SolentKestrels complete their dominance over @NBLengland Division 1 this season with a 93-62 victory! 🏆#BritishBasketball

“It feels great, it feels great to do it with my brothers too,” Smith said. “The last game of the year especially after we didn’t get to do it last year. It feels good, especially with a group of guys I love to be around and have developed life long friendships with.”

“It’s been an incredibly tough year for everyone, and it’s a credit to everyone to make the league happen and make this final event happen so it’s an incredible feeling,” Solent Head Coach Matt Guymon said.

“He’s the engine to our team,” Guymon added talking of Smith. “When he’s playing like that, I don’t think there’s many guards better in the country.”

A dominant 28-16 first quarter set the tone, behind 12 points from Ian Smith and Solent’s 5 of 9 shooting from behind the arc.

Despite a better second quarter from Hemel, Solent still maintained a 48-36 lead heading into the break as Smith proved unstoppable to keep Storm at bay.

A 9-0 run punctuated by a Brendan Okrononkwo three saw the lead extend to 21 just two and a half minutes into the second half and from there it was plain sailing.

Crisp ball movement and dominance on the offensive glass followed along with more dominance from Smith down the stretch with the lead ballooning at times as the celebrations began on the final buzzer for Solent.