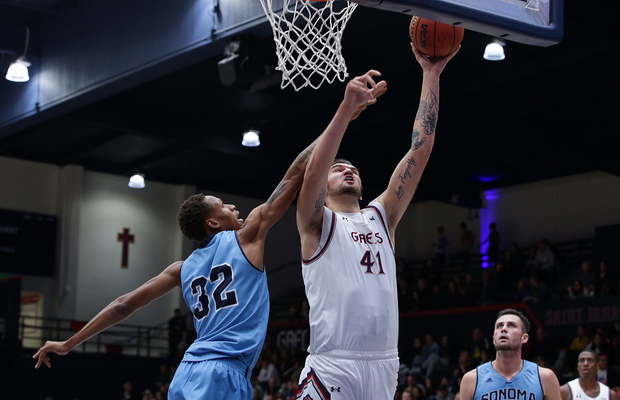 Aaron Menzies has signed his first professional contract after joining LEB Gold side Ourense for the 2020-21 season.

Excited to announce that I will start my career as a professional basketball player at Club De Ourense! Thankful for all of my family, coaches and teammates that have helped me along the way to make this possible. Vámonos! 🇪🇸😎

During that campaign, Menzies fired in a career-high 32 points with averages of 11.3 points, 8.9 rebounds and 2.3 blocks having started 33 of 34 games.

The Manchester native transferred to Saint Mary’s but would miss the entire next season due to a hand injury.

Menzies was also part of the GB Under-20s roster that competed in Division A in the summer of 2015 as well as representing England at Under-18 level.

Ourense had a 10-14 record in Spain’s second tier last season before the campaign was halted due to the coronavirus pandemic.

Menzies will be joined by several other Brits in Spain with Mo Soluade, Taiwo Badmus and Patrick Whelan also competing in LEB Gold, while Josh Steel, Danny Evans and Joe Junior Mvuezolo will be in LEB Silver action.