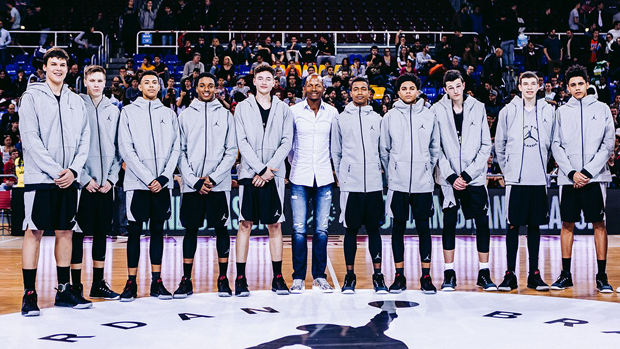 Real Madrid and England Under-16 guard Kareem Queeley has cemented his status as one of the top junior players in Europe after selection to the Jordan Brand Classic International game this week.

Following on from the Jordan Brand Classic tour that took place from March 10th-12th in Barcelona that featured 40 of the top players in Europe, Queeley made the cut as one of the top 10 to be flown to the US to play in the all-star game at the Barclays Center in Brooklyn on April 14.

Queeley becomes the first Brit to make the international game in Brooklyn since Josh Steel in 2013.

The former Leicester Warrior got to rub shoulders with NBA legend Ray Allen whilst being put through his paces in Barcelona at 11th annual camp, which focuses on not only skill training but strength and conditioning sessions with star coaches from both the U.S. and Europe. The final day of the camp is highlighted by an all-star game featuring the top 20 players, as chosen by the coaches.

The selection to be flown to Brooklyn will be another accolade on Queeley’s resumé, which has only got longer since first garnering international attention after picking up MVP honours in Spain’s Minocopa in 2015.

He signed with Real Madrid shortly after, and won an Under-16 Championship with the side last year.

Queeley averaged 12.3 points, 7 rebounds, 2.5 assists and 1.3 assists for England last summer, still a year young, in his second year at the European Championships with the squad.

Hoopsfix wants to congratulate Kareem and wish him all the best with his experience!