Josh Steel Represents the UK at the Jordan Brand Classic in Brooklyn - Hoopsfix.com 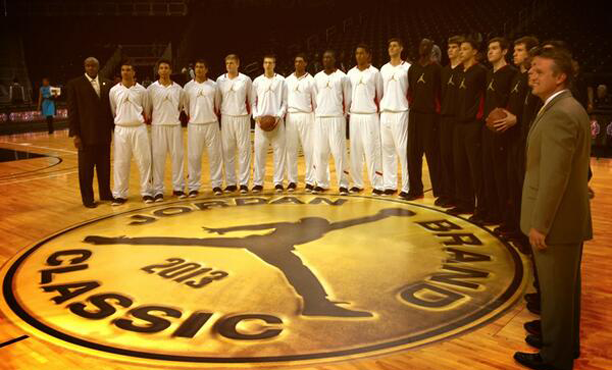 Josh Steel became just the third British player to compete in the Jordan Brand Classic International Game on Saturday night, finishing with 6 points as his White Team lost 76-72 to the Black side at the Barclays Center in Brooklyn.

The 6’4″ guard played 25 minutes and added 2 rebounds, 1 assist and 3 steals to his point total, which came on back to back threes in the second quarter. His dime was off the back of an “oooh” inducing crossover at mid-court before making the assist to a teammate for a dunk.

Like fellow Brit Jules Christian last year, Steel got the starting nod in the all-star game which features the top under-16 basketball players from around the globe. Croatia’s Lovzo Mazalin (12 points, 8 rebounds) and Canada’s Jamal Murray (24 points, 7 rebs, 1 assist) were named co-MVPs.

Steel is a likely lock for the final England Under-16 squad that will compete at the Division B European Championships in Bosnia and Herzegovina from 8th to the 18th August 2013.