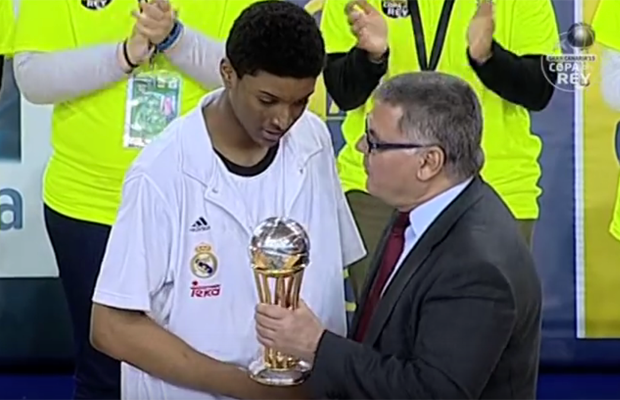 Following on from a breakout season, Leicester Warriors’ Kareem Queeley has signed a multi-year junior contract with Spanish powerhouse Real Madrid that will see him based overseas until at least the age of 16.

The 2001 born guard has recently returned from the Division A European Championships with the England Under-16s, making the squad two years young to be the youngest player on the team.

Queeley finished with a 43 efficiency rating in the final after a 36 point, 13 rebound double double, where he led Real Madrid to a 83-60 win over Unicaja. It was the second time Real Madrid had flown him out to get a closer look at him, after first being put on to him after a Spaniard saw him play in Sheffield around a year ago.

“Real Madrid are one of the biggest clubs in Europe. I know that being a part of this club can only improve me as a player.”

Kareem joined Leicester Warriors basketball club as a 9 year old, initially being a football player before making the switch to the hardwood.

“I know it’s a bold statement, but the talent that he possesses, the things he can do, athletically and with the ball, is great.”

“He works tirelessly…he just loves playing. He doesn’t care about all this hype, he just wants to get on the court and show what he can do and that’s what I love about him. He’s very coachable and is a great kid.”

He has dominated junior basketball with some incredible individual performances in recent years, having scoring outbursts including multiple 90 and 80 point games.

I'm told U13 phenom Kareem Queeley just had 59 points & 32 rebounds in the U13 National Schools Final to win the chip.

Queeley was involved with the England Under-15 Development programme this season before stepping up with the Under-16s.

“He has been very hardworking and committed to the club, dedicating a lot of time training with a couple of age groups during the week and during his holidays,” his Leicester Warriors coach Arbham Giga said.

“The biggest contribution he has made is inspiring our younger players. He has been an excellent role model to many young players who have taken up basketball at the club.”

Queeley departed for Spain a week ago to begin the newest chapter of his career.

Hoopsfix wants to wish Kareem all the best for the next step!