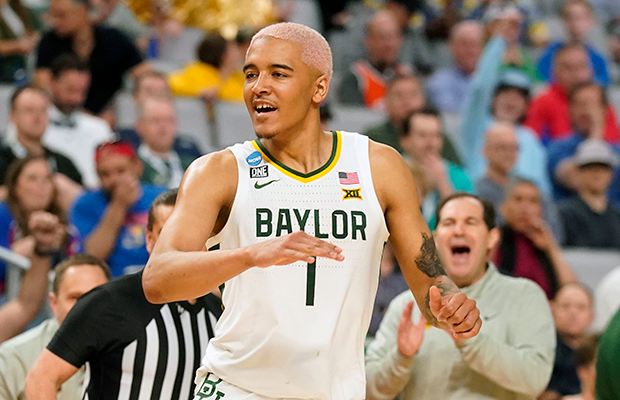 Jeremy Sochan has declared for the 2022 NBA draft following a standout freshman year at Baylor, as first reported by ESPN.

Sochan has hired agents and will forgo his remaining college eligibility as a projected lottery pick after being named Big 12 Sixth Man of the Year, All-Big 12 honourable mention and Big 12 All-Freshman team.

In a video posted to his social media he made the announcement, saying in the voiceover;

“It’s been a ride. A journey with so many positive people by my side, but I always knew my destination. A destination where you can get lost and forgotten, but I know me and I know who is behind me. From the days in England, to playing in Poland, Germany and America, I’ve been fortunate enough to create bonds with all these coaches and teammates. All I can say is thank you, and you will always be a part of me. And with that being said, I am declaring for the 2022 NBA draft. Let’s play.”

The “Let’s play” phrase to sign off has become synonymous with Sochan, as featured in his Hoopsfix mixtape following a huge dunk as a 15 year old playing for Itchen College against a stacked Under-19 Barking Abbey side.

Sochan was born in the US, but moved to Southampton at the age of three, moving to Milton Keynes at 7 – where he played for the Trojans until 2019 – returning to Solent for the 2018-19 season, where he played with the Kestrels and Itchen in the EABL. Sochan moved to La Lumiere High School in the US where he became nationally ranked, before returning to Europe to play in Germany with Ratiopharm Ulm and their feeder team Orange Academy.

From there, he committed to Baylor where he his reputation has only grown this season.

The 18-year-old averaged 9.2 points, 6.4 rebounds and 1.8 assists in 25 minutes per game this season while helping Baylor to a 27-7 record, a Big 12 Championship and a No. 1 seed in the NCAA tournament, establishing himself as one of the best defenders in college basketball.

“I am fortunate enough to be declaring for the 2022 NBA draft,” he told ESPN. “I may be the only player in this draft who played at an American high school, in Europe versus men, and in college at the NCAA level. This experience has been extremely useful for me both on and off the court. I think my ability to work hard, learn and adapt quickly will make it easier for me to evolve.”

Sochan – who has both Polish and American passports – ultimately ended up representing Poland in international competition after GB failed to sort out his British passport. He suited up for the Poland Under-16s in 2018 and 2019, leading them to Division A promotion whilst picking up the Division B European Championship MVP.

The 6’10” forward became the youngest player in history to play for the Poland Senior National Team last year, having an 18-point outing in a win over Romania at the FIBA Eurobasket Qualifiers.

If drafted, Sochan will become the first home grown British player to be drafted in 12 years, since Ryan Richards in 2010, who was selected with the 49th pick in the second round.