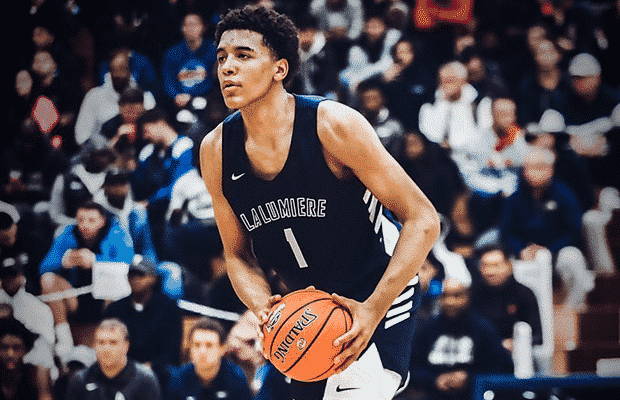 Top 2003 born prospect Jeremy Sochan has announced he will be playing in Germany for OrangeAcademy next season, moving from La Lumiere School in Indiana, US, due to the coronavirus pandemic.

The surprise move from the high-major recruit from the Class of 2021, comes as he – like many British student-athletes – is unable to get to America at the moment due to the travel ban, and remains wary of the uncertainty around the upcoming basketball season in the US.

Given the times that we are in and the uncertainty surrounding next year, me and my family felt like it’s best for me to stay in Europe to finish my high school education and to continue my basketball development closer to home. pic.twitter.com/coKjYfcwB2

“I left due to uncertainty,” Sochan, who is already in Germany, told Hoopsfix. “Aside from travel (my family can’t go to US currently), and school, no one knows what will happen with the basketball season, and this year is really important for me.

“LaLu is a great place to play high school basketball at the highest level in America, and I definitely felt I had more to give in my second season, but this situation is out of everyone’s control.”

OrangeAcademy, based in Ulm, compete in the second division (Pro A) in Germany and are the development side for top flight Basketball Bundesliga (BBL) side Ratiopharm Ulm.

“Ulm is a place I visited a couple of years ago, and I stayed in touch with the coaches there – the relationships are the most important thing in basketball,” Sochan added.

“They can definitely push me and prepare me for the next level, and that’s exactly what I want to do this year – keep getting better. There were other schools in America as well as clubs from Spain who contacted me, but as I said, I know and appreciate people in Ulm, and the opportunity they offered me.”

Sochan – who has both Polish and American passports but was raised in the UK – has garnered international attention since picking up Under-16 Division B European Championship MVP last year with Poland.

Since moving to the US for the 2019-20 season, the 6’7″ forward has been ranked as high as top 50 nationally with some ranking services, whilst his side, La Lumiere were ranked 5th nationally, being 25-4 before the season came to a premature end due to COVID-19.

He will retain his NCAA eligibility whilst in Germany, and will still be able to attend a US college for the 2021 season should he wish to.

“I’ve been fortunate to have had a lot of interest and offers, but what’s important is to find the right place and the right environment,” Sochan concluded.

“I’m in regular contact with about half a dozen great schools, like Baylor, Florida State, Creighton and Virginia, and I really appreciate the time the coaches put in building a relationship with me and my family.”

Sochan was born in the US, but moved to Southampton at the age of three, moving to Milton Keynes at 7 – where he played for the Trojans until 2019 – returning to Solent for the 2018-19 season, where he played with the Kestrels and Itchen in the EABL before moving to the US last season.

He showed a strong interest in representing Great Britain but conversations with the federation around getting his British passport went unresolved.