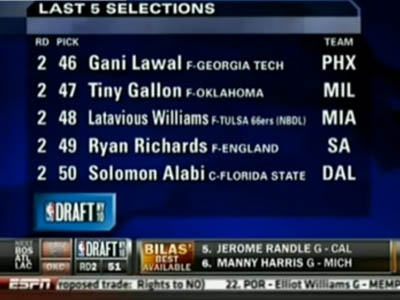 Ryan Richards, the 6’11, 230lbs big man out of Kent, became the first British basketball player since Joel Freeland in 2006 to get drafted by an NBA team last night. He was selected with the 49th pick in the second round by the San Antonio Spurs.

Richards declared for the draft back in April, in what many considered a bad move, but after impressing a lot of people at the NBA combine and then having strong showings in a number of team workouts he has slowly seen his draft stock rise. Now that he has been selected, it will be interesting to see what San Antonio’s plans are for him; he has made it clear he doesn’t want to go back to Europe, which makes the Spurs’ D-League outfit, the Austin Toros all the more likely. Or maybe he will do enough to sit on the roster next year?

Whatever happens, Hoopsfix wants to wish Richards all the best with his NBA career, I’m sure I, and the rest of the British basketball community will be avidly following!

You can follow Ryan Richards’ NBA draft story by checking out his pre-draft timeline.