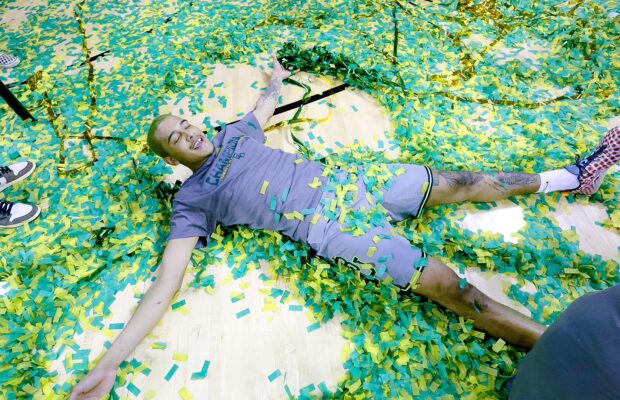 The former Solent Kestrel had 10 of his 12 points in a big 22-0 run for Baylor, the saw them fend off a late comeback from Iowa state to win 75-68 on Saturday night in the regular-season finale.

Sochan scored 10 points in Baylor’s 22-0 run with two dunks, a 3-pointer, a jumper and a free throw in a stretch that saw Iowa State miss 14-consecutive shots and fall behind by 25 when Adam Flagler hit a pair of free throws with 7:53 left in the first half.

The 6’9″ Hoopsfix All-Star Classic alumnus has turned heads this season and appearing on NBA mock drafts for this summer should he declare. He won the starting role at Baylor mid-season, and is currently averaging 8.7 points and 6.1 rebounds on 48.6% shooting while being recognised for his stellar defence.

His season-high 17 point performance against Kansas last week was enough for ESPN’s Mike Schmitz to say he looked like “a potential lottery pick”.

Jeremy Sochan was so good in a win over Kansas that I decided to make a 5-minute breakdown on his performance + how it translates to the NBA. One of the most versatile players in the NCAA. Have really enjoyed watching his progression since the U16 Euros (B Division) in 2018. pic.twitter.com/hccBLEs0Fb

Seeded second for the Big 12 Tournament, Baylor will face seventh-seeded Oklahoma (17-14, 7-11) in the quarterfinals at the Sprint Center in Kansas City.