Jeremy Sochan Picks Up U16 Division B MVP After Leading Poland to Gold - Hoopsfix.com 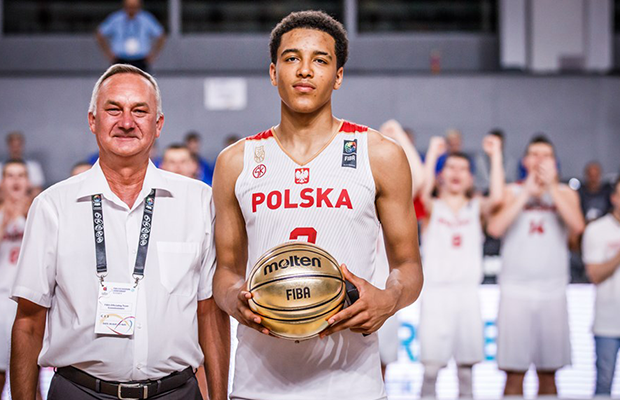 Itchen and Solent Kestrels guard Jeremy Sochan has been named the FIBA Under-16 European Championship Division B MVP, after leading Poland to their first Division B title since 2007.

Poland defeated Netherlands 71-58 for the 2019 crown, using a 19-1 fourth quarter run where Sochan picked up 8 of his 15 points to pull out the victory.

Monster first day at the U16s Division B for Poland's 6-8 physical specimen Jeremy Sochan: Had a couple of dunks, hit a 3, grabbed 13 boards and finished with 6 steals and 4 blocks. Big-time talent. pic.twitter.com/AG8HrsKp4H

He had his tournament highs of 28 points against Bulgaria in the Group Phase, 14 rebounds against Czech Republic in the Quarter-Finals and 7 assists against Norway in the Group Phase. He stuffed the stat-sheet in Poland’s opener with 15 points, 13 rebounds, 1 assist, 6 steals and 4 blocked shots against Sweden.

With both Polish and American passports, Sochan was born in the US, but moved to Southampton around the age of three, moving to Milton Keynes at 7 – where he played for the Trojans until this year – returning to Solent this season, where he played with the Kestrels and Itchen in the EABL.

He showed a strong interest in representing Great Britain but conversations with the federation around getting his British passport went unresolved.

Suiting up in the Hoopsfix All-Star Classic this summer, he has committed to US powerhouse La Lumiere High School in Indiana for the coming season.