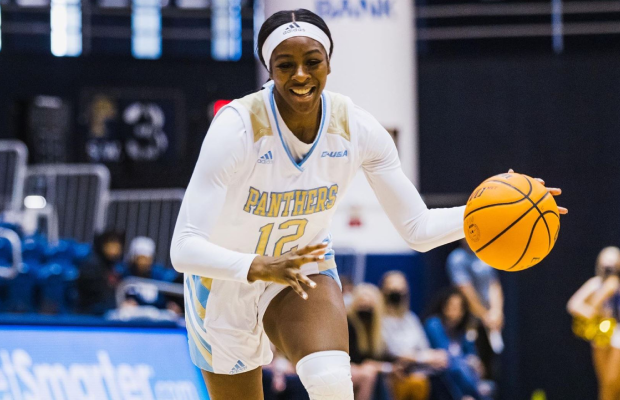 The final recap of the 2021-22 college season as we check in on how the Brits concluded their campaigns through February and March ahead of the NCAA Tournament.

Hannah Jump helped Stanford (28-3) clinch another PAC-12 Championship as they followed up their regular season title. The sharpshooter netted 12 points with four triples to start February before knocking down five three-pointers in a 19-point haul against Oregon State with four games in double figures throughout the month.

Esther Little celebrated success with Gonzaga (26-6) in the WCC tournament as they punched their ticket to the NCAA Tournament, while Ella Doherty won a regular season title with Toledo (25-4) with just one defeat in conference play as they entered the post-season as the number 1 seeds before a surprise semi-final defeat.

The MAC Championship was won by Buffalo (23-8) as they defeated Toledo’s victors Ball State in the final with Loren Christie part of the starting lineup. The junior forward had posted a double-double of 14 points and 12 rebounds midway through February and closed out the regular season with three successive games in double figures in scoring, whilst posting nine points and six rebounds in the opening post-season win.

Grace Heeps also won a Conference Championship as UAlbany (23-9) prevailed in the America East tournament; beating the number-1 seeds Maine. Heeps scored 10 points during February and finished the month with 11 points on 4-of-6 shooting in the regular season finale.

Elsewhere, Savannah Wilkinson opened February with 16 points and 14 rebounds with the streak of 10+ points ending at 19 games following a brief injury battle. The GB international returned to the starting lineup with 12 points to close out the regular season for SMU and recorded 10 points and 14 rebounds in an eight-point victory in the AAC Tournament before their semi-final exit.

Kyla Nelson and Emerald Ekpiteta both passed the 1000-point mark in their college careers during February. Nelson scored 23 points with four threes in a 68-60 success for FIU (15-15) as they defeated FAU in the post-season before losing out in the next round. The senior guard also poured in 21 points at the end of February and had an average of 12.7 points per game as an Honourable Mention in the end-of-season awards.

Very hurt about the loss today but couldn’t write it much better. Got my 1000 points on the day dedicated to raise awareness for cancer. It’s been one hell of a journey and my story isn’t finished yet💪🏽 Wouldn’t want to reach this milestone with any other program! https://t.co/zNmtdKBk3A

Ekpiteta returned to the starting lineup in February with back-to-back games of 12 points and nine rebounds. She would post averages of 7.7 points and 6.8 rebounds per game in the regular season, finishing with eight points and eight rebounds. Fellow CoLA alumni Simona Henshaw was in opposition for Florida Atlantic (5-25) and had scored five points in the regular season finale, whilst having scored six points in on earlier matchup with Charlotte.

Gabby Nikitinaite had a blistering start to February with 19 points followed by 15, 18 and 17 points before putting up 25 at Tennessee State – earning another Player of the Week award for SIUE (13-18). The redshirt senior opened the OVC tournament with a 24-point haul along with seven assists in an 86-84 triumph but SIUE were eliminated at the quarter-finals stage. Nikitinaite had also earned All-OVC and All-Newcomer first team awards.

Meanwhile, Amelia Sandie continued to give Nicholls State (4-21) big minutes having logged over 700 upon a comeback from injury. The redshirt freshman posted six points, five rebounds and six assists against Incarnate Wood in a two-point loss in overtime and also scored seven points in the regular season finale. Emma Imevbore produced a solid finish to the season for Lamar (14-14) with eight points followed by nine points in eight minutes before firing in a best of 17 points in just 12 minutes to conclude the regular season.

Milly Knowles had eight points and eight rebounds at the start of February before a season-best of 13 rebounds against Northern Colorado. The former Myerscough forward also netted eight points for EMU (9-21) as they were beaten in the Big Sky Tournament and finished with averages of 5.7 points and 5.1 rebounds per game on the season. Becky Dwomoh netted three point on four occasions for Robert Morris (14-15) to conclude a freshman year.

Maya Price was named SSC Player of the Year after a big season with Eckerd (20-4) – reaching double figures in eight of last nine games including 19 points at Florida Southern and a double-double against Barry. The junior centre had seven blocks – the leader in the SSC in this category – in the regular season finale and then put up 22 points, nine rebounds and six blocks in the semi-final win and Eckerd earned an NCAA Tourney spot, despite losing to Florida Southern in the Conference Championship.

Shauna Harrison had a strong run of form with seven games out of eight in double figures in scoring and closed February with a season-high of 22 points against Gannon as Cal PA (24-5) won all the games in that span. The guard/forward also recorded 15 points and 12 rebounds in a semi-final win over Shepherd before her side came up short of the PSAC Tournament title.

[NOTE: Eckerd and Cal PA both won their opening games at the NCAA DII Tournament before losing in the Second Round.]

Ladun Akako has been sidelined since January through injury and missed the NCAA DII Tournament after Academy of Art (18-10) received an at-large berth following their loss in the PacWest Conference Championship game.

Senior guard Alix Henderson had back-to-back games with nine points in February before netting 12 points without a miss against CUI as part of a six-game losing run – PLNU (15-14) would lose to Academy of Art in the post-season. Charlotte Ellmore netted a season-high of 19 points for West Florida (19-8) before posting a double-double of 17 points and 10 assists as they had an opening loss in the post-season.

Harriet Swindells scored 17 points to lead Barry (16-10) to an opening win over Saint Leo in the post-season before they lost in the semi-finals. Ashleigh Pink had 13 points and six rebounds and then 13 points and five assists before a season-high of 15 points to conclude February’s action.

Holly Davies scored a season-high of 20 points for Newberry (12-16) at the start of February and also netted 13 points at Lincoln Memorial, while Ella Pearson hit double figures for first time with 10 points in the same game and five games with 20+ minutes during the month. Davies also scored seven points in their SAC Tournament defeat.

Rebecca Morrison opened February with a 16-point haul against Jefferson and repeated the feat on two other occasions including in a 40-minute effort in the regular season finale for Caldwell (13-15) as they earned a five-point victory. Shawnisay Millar posted 15 points and nine rebounds for Midwestern State (14-13) and also had 14 points before recording eight points and 10 rebounds in the next outing.

Dani Lozzi closed out her collegiate career as the SSC leader in steals, whilst setting the school record for Lynn (12-13) for free throw percentage at 86.9%. The senior guard scored 13 points at Saint Leo as part of a five-game winning run and had 12 points in their season-ending loss to Florida Southern in the post-season. Lozzi earlier had six points, nine rebounds and eight assists against Florida Tech as fellow Brit Loie Webb fired in 18 points.

Meanwhile, Dami Adeyinka fired in a best of 17 points at the start of February for Quincy (9-20) after going 6-of-9 against Lewis before surpassing that mark with a 19-point haul against William Jewell in a 72-54 victory – sparking a run of four straight games in double figures.

Precious Adediran scored a season-high of 11 points in the regular season finale as Georgian Court (13-13) finished with a win before losing their opener in the CACC Tournament, while Megan Sheret matched a season-high for Fresno Pacific (9-15) with eight points at Point Loma and also collected 10 rebounds to go with six points at Chaminade.

Two former Barking Abbey guards went head-to-head in the post-season as Saint Anselm (15-13) defeated AIC (10-16) 61-53 with Zoe Willis finishing with seven points and 10 rebounds, while Macy Spinks had seven points and four assists in the win. Willis also netted 11 points on two occasions for AIC during February including the regular season finale.

Kadija Conteh helped North Central to a Conference Championship, whilst earning All-Conference second team honours in the process as the Rams made it to the NCAA DIII Tournament.