GB Under-18 Women turn it around to beat North Macedonia - Hoopsfix.com

GB Under-18 Women turn it around to beat North Macedonia 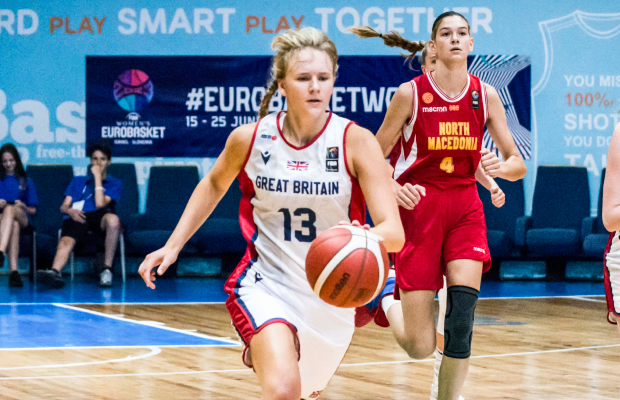 GB Under-18s recorded a 71-54 victory over North Macedonia to bounce back from an opening loss at the FIBA U18 Women’s European Championship on Monday afternoon.

Something clicked for Kenrick Liburd’s side in the face of a nine-point deficit in the third quarter as a stunning period of play completely changed the course of the contest as GB improve to 1-1 in their Division B campaign.

Katie Januszewska led an all-round team effort with 10 points and 13 rebounds for a double-double as well as six steals and two blocks. Carys Roy made a tournament debut with 12 points and nine boards for a near double-double with Leia Edwards adding 11 points, while Issy Bunyan had nine points and six assists.

North Macedonia opened the scoring from beyond the arc, but GB responded with the next nine points – including consecutive baskets for Januszewska – as they kept their opponents scoreless in a near six-minute spell to take control.

GB’s early advantage had been cut to just two points, but Louisa Gibbins’ offensive rebound and score just before the buzzer made it 16-12 after 10 minutes.

Edwards broke GB’s drought in the second with her first points of the game as points proved hard to come by for both sides. GB did not add another field goal in the half as North Macedonia used a 7-1 run across the final six minutes to take the lead, until Forster stopped the rot with a long-range two to make it 21-21 heading into the interval.

Edwards converted an and-1 play early in the third, but North Macedonia soon began to make their move as they opened up a nine-point cushion. Welsh duo Bunyan and Roy combined at both ends of the floor in a 11-3 run capped by a corner three from Violet Stutz to fire GB ahead.

Stutz would strike again from the same spot in the final minute of the third as GB remained in the ascendancy with their offence firing to take a 45-40 lead into the fourth quarter.

GB overcame their earlier shooting woes from outside the arc as Bunyan connected with another triple as the gap moved into double figures in a huge swing. There was no let up down the stretch as GB wrapped up a 17-point victory.

– GB now have a 1-1 record in Group A
– Their next game is against Croatia at 4:30pm on Tuesday
– Starters: Charity, Januszewska, Bunyan, Edwards & Roy
– GB finished 4-of-18 from beyond the arc with 32% shooting overall