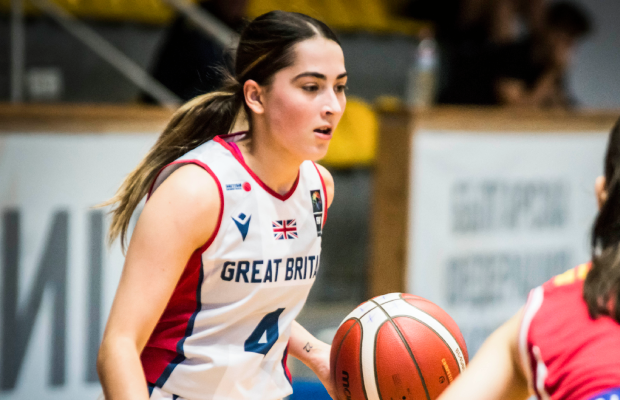 Great Britain’s Under-18s picked up their second win in Division B at the FIBA U18 Women’s European Championship with a strong finish to beat Ukraine 70-60, on Thursday.

Katie Januszewska led the way with a game-high 17 points to go with six rebounds, four assists and five steals as GB opened the 9-18 Classification group with a win.

Charli Wroe added 16 points and four steals after being inserted into the starting lineup with Issy Bunyan also contributing 11 points along with four rebounds, three assists and three blocks.

Wroe helped GB into an early advantage with two driving layups as they were creating offence through defence with Natalie Charity pushing the lead out to 17-11 with an easy scorer. Ukraine responded out of the timeout with a 12-1 run to move ahead through 10 minutes.

Ukraine entered the game at 4-of-46 (8.7%) from 3-point range in the competition, but suddenly found their outside threat with two more triples taking them to a 4-of-6 start as they established a nine-point cushion at 29-20.

Charity hit a much-needed three for GB, only for Ukraine to immediately answered with their fifth and while a sixth followed, GB managed to stay in touch through Katie Januszewska and Wroe as they went into the half-time break down 39-34.

GB came out firing with the first 10 points as Issy Bunyan’s strong drive was followed by Wroe moving into double figures for the first time. Ukraine were held scoreless for almost seven minutes as GB took a low-scoring quarter 11-5 to lead 45-44 with 10 minutes to play.

Wroe fired in a three to start the fourth, but Ukraine hit back with two of their own to re-take the lead as part of an 8-0 run. There was another twist as GB put together a pivotal 19-0 spell that paved the way to victory in the final stages.

– GB missed out on the quarter-finals after finishing fourth in Group A (1-3)
– Results against Luxembourg (L) and North Macedonia (W) count in the group
– Wroe/Janneh replaced Charity/Edwards in the starting five
– Clem Odom, Violet Stutz were DNPs
– GB shot 41% from the floor with 5-of-16 3PT
– GB face Estonia in their next game on Saturday before a final classification game