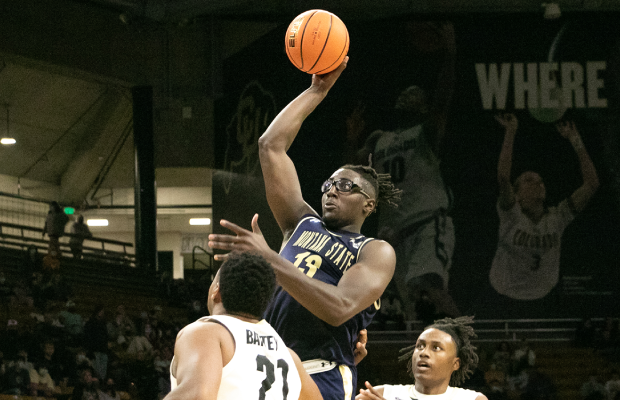 As March Madness descends with the NCAA Tournament, we look back on how the leading Brit performers got on over February and March.

British trio Amin Adamu, Jubrile Belo and Great Osobor celebrated double success with Montana State (27-7) as they backed up their regular season title with the Big Sky Championship triumph. Adamu netted 16 points in the 87-66 win over UNC with Belo contributing eight points and six rebounds, while Osobor had seven points and six boards.

Belo had 17 points at the start of February before putting up 19 points, six rebounds and four assists as well as a double-double of 21 points and 16 rebounds to average 13.0 points and 6.8 rebounds per game – winning the Conference MVP and Defensive Player of the Year awards. Adamu had 10 games in double figures including a best of 17 points with Great Osobor posting a season-high of 19 points in the same game.

Tosan Evbuomwan was a unanimous selection as Player of the Year in the Ivy League for Princeton (23-5) having matched a career-high with 27 points during February as well as a 26-point outing. The junior forward posted 23 points to clinch the outright regular season title and scored 21 points – including the go-ahead score – to go with six rebounds and six assists in a four-point semi-final victory over Cornell to reach the Championship game.

There was also success for Kayne Henry as Jacksonville State (21-10) won the regular season title, which would cement their spot in the NCAA Tournament as Conference winners Bellarmine are ineligible. Nelson Boachie-Yiadom won the regular season title with Davidson (25-5) with eight points, three rebounds and three assists in a first start on senior night and the Wildcats have advanced to the Championship game as the number-1 seeds.

Jeremy Sochan earned the Sixth Man of the Year award in the Conference and matched a season-high of 17 points on two occasions in February as Baylor (26-6) went on to suffer a surprise post-season defeat, though they are expected to receive an at-large berth.

Caleb Fuller had 14 points and eight rebounds at the start of February before scoring 18 against CSU Bakersfield in an 81-79 victory before an injury layoff. The junior forward netted 18 points again in the regular season finale for UC Davis (13-10) and then posted 16 points along with eight boards in their Big West Conference tournament opening win. Ade Adebayo had a run of two games in the starting lineup in late February and netted a best of five points against CSUN.

Ethan Price started February with 14 points and six assists and finished with back-to-back games with 17 and 18 points. The freshman opened March with 13 points and six rebounds before netting 11 points as Eastern Washington (17-14) won their final two games with Price named Freshman of the Year award in the Big Sky Conference.

Dan Akin posted 12 points and 17 rebounds for California Baptist (18-15) in a run of three games in a row with 12 points as they went on to lose in the post-season tournament. Former teammate RJ Eytle-Rock netted a best of 16 points for Utah State (18-15), while Harry Morrice posted a season-high of 14 points on 6-of-9 shooting at Gardner-Webb along with five rebounds for North Carolina A&T (12-20).

Vasja Pandza hit double figures in scoring for the third time this season for Seattle (23-8) with 11 points in an eight-point win over UTRGV in February as they went on to claim a three-way share of the regular season title.

Cameron Hildreth had six points in February before a best of eight points in the next outing in a 99-77 victory over Louisville. Matt Marsh netted eight points on 4-of-5 shooting in 11 minutes at Clemson as Wake Forest (23-9) went on to lose in the ACC Tournament opener in an overtime loss against Boston College.

Amari Williams posted back-to-back double-doubles at the start of February before a best of 19 points for Drexel (15-14). The sophomore was named CAA Defensive Player of the Year and had a career night with 20 points and 19 rebounds against UNCW with Mate Okros netting eight points in successive games to finish with an average of 5.6 points per game.

AJ Edu made first appearance of the season in February for Toledo (25-3) as they went on to win MAC regular season title before a post-season defeat. Shaquille Walters scored 13 points at Drexel for Northeastern (9-22) before 14 points on 6-of-8 shooting and had 17 points in an opening post-season victory, though they would exit against the number-1 seeds.

Sam Alajiki had a best of seven points for Cal (12-20) to earn a return to the starting lineup prior to their opening defeat in the Pac-12 Tournament. Robinson Idehen netted 11 points on 5-of-5 shooting in the second game of the month as well as eight points in nine minutes of a season finale for UC Santa Barbara (16-10).

Zion Tordoff had a run off the bench for HBU (11-18) with a best of 11 points before netting 16 points from the start in an epic 149-144 quadruple overtime triumph. He also had eight points and seven rebounds in an opening Southland Conference Tournament win before being beaten in the next round.

Micheal Anumba netted 13 points for Winthrop (23-9) before finishing the campaign with 12 points and six rebounds as they fell to a post-season defeat. Gedi Juozapaitis started February in double figures with 10 points and had three more games with at least 10 points including a season-high 15 points for Georgia Southern (13-16).

Freshman Ndewedo Newbury had a season-high six points for San Francisco (24-9) in February, while Eduardo Andre hit 10 points for Nebraska (10-21) to reach double figures for the first time since the opening night. Josh Uduje had back-to-back games in double figures at the start the month and did so again with a best of 12 points for Coastal Carolina (16-13).

Jonathan Komagum netted a season-high of 15 points at the start of February and would return to the starting lineup down the stretch for Sacramento State (11-17) – had at least three blocks in a game on four occasions including four rejections in 57-54 win in Big Sky Tournament opener.

Tomiwa Sulaiman fired in a season-high of 26 points along with eight rebounds and three steals during February for IUP (29-2) on the way to being named Rookie of the Year. The freshman had a double-double of 11 points and 11 rebounds before scoring 18 points against Clarion and had another double-double of 10 points and 13 rebounds in the semi-finals of the post-season as IUP won the PSAC Championship.

Veron Eze and Alex Distras head to the NCAA DII Tournament with Augustana (24-3) after they were named as the number-1 seeds in the Central Regional, despite losing in the semi-finals of their post-season tournament. It was similar for Ciaran Sandy and Junior Oscar as Mercyhurst (24-6) made it following their Conference semi-final defeat.

Two Brits went head-to-head in the Northeast-10 Championship game as Bentley (22-4) defeated Franklin Pierece (18-10) as Adria Amabilino-Perez scored 11 points along with six rebounds and two blocks off the bench in the win. Sean Trumper had scored a season-high of 18 points in FPU’s victory over Pace and netted 10 points on three occasions during February.

Eisley Swaine scored three points in a four-point loss for Findlay (19-10) in the post-season tournament, but they still made it to NCAA DII Tournament, while Chris Feeney also made it with Flagler (23-7) although has not played since December.

[NOTE: Swaine, Feeney and Trumper were all beaten in the first round of the NCAA DII Tournament]

Meanwhile, Jelani Watson-Gayle continued an impressive scoring streak – it was broken with a first game in single figures in February – averaging 19.0 points per game. He fired in 28 points on 8-of-11 shooting having been named Newcomer of the Year with 15 points as Fresno Pacific (17-10) were beaten in the post-season. Sean Nealon-Lino had seven points and 10 rebounds in the loss having posted a first double-double in the regular season finale in a run of four consecutive starts, while Alex Ferguson had best of six points.

Sesan Russell had a best of 26 points in February in a two-point OT loss at Tampa to go with nine rebounds and six assists as Florida Tech (13-13) won four of their last five before an opening defeat in SSC Tournament as Russell scored 21 points. Niall Harris remained in the starting lineup after breakthrough month in January with four games in double figures in scoring including best of 16 points as well as 15 points on 6-7 shooting off the bench against Eckerd.

Sam Grant scored 15 points on 6-of-10 shooting for season-high off the bench and followed with 12 points against Eckerd in the final two games of the regular season with Josh Mims netting eight points without a miss in seven minutes.

There was a season-high of 12 points for Obi Agu in late February for Northeastern State (16-14) as they closed with back-to-back wins before a defeat in the MIAA quarter-finals. Nathaniel Powell set season-highs in successive games with 16 points and 17 points for UM-Crookston before another 16-point game, while Josh Apple posted 17 points for ECU (11-8) upon a return on Senior Night after missing multiple games.

Robin Bedford – who earned an academic award – netted seven points along with four assists for Newberry (15-13) – who eventually fell in the semi-finals of the post-season tournament with Callan Low collecting a season-high of six rebounds against Mars Hill in 15 minutes of action.