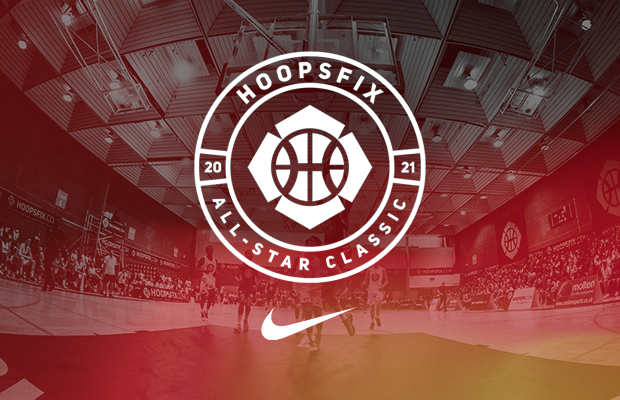 The rosters for the 2021 Hoopsfix All-Star Classic Under-19 Men’s game have been confirmed with 24 of the best young talents in British basketball ready to take to the stage.

Two NCAA Division 1 signees take to the floor for their final game before departing to the US, as Myerscough’s Great Osobor, heading to Montana State University, and Charnwood’s Giovanni Emejuru, who has signed with Sam Houston State University, set up a tantalising match up in the post.

Emejuru’s teammate Greg Wild joins him on team black, fresh off signing his first professional contract with Leicester Riders, along with GB U18 Victor Ndoukou, as the trio will all suit up on Team White.

There are four players returning from overseas to represent in the Classic, GB junior international Quinn Ellis, fresh off his season with Orlandina in Italy, former Haringey Hawks backcourt teammates Alex Distras – who has signed with NCAA D2 Augustana University next season – and Owen Young, fresh off a prep year in Iceland with Selfoss Karfa, along with highly touted Class of 2023 prospect and GB junior international Sultan Adewale who is back for the summer from St. Louis Christian Academy in the US.

Two of the highest flyers in the country in CoLA’s Toibu Lawal – heading to Lee Academy Prep next season – and London Elite’s Stephen Ovia, take to the floor after electrifying crowds since basketball has restarted, whilst Sheffield College’s Hensy Sako is another player who has burst onto the scene in the EABL Summer Showcase.

Sussex Storm’s long-armed Brandon Laryea, heading to UNB in Canada next season, along with Canterbury’s sharp shooter Will Raife and Copleston’s Moyo Adekeye, who has returned to strength after an injury, all make the cut.

ABL North MVP, QE’s Elijah Walsh gets selected before he heads to Masters Academy in Florida, and one of the country’s top rebounders and defensive players in James Watt’s Josh Ijeh provides support in the front court of Team White.

Meanwhile, there were also a number of players in line for selection that are not able to participate in the game that we would like to recognise.

Top Class of 2021 duo Jeremy Sochan and Cameron Hildreth have both departed for Baylor and Wake Forest respectively, as well as Blake Bowman (UMKC), Ethan Price (Eastern Washington) and Ndwedo Newbury (San Francisco), whilst Josh Uduje remains in the US, Michael Belle (SIG Strasbourg) has to self isolate on his return from France, and Sam Alajiki (Cal) was unavailable due to personal commitments.