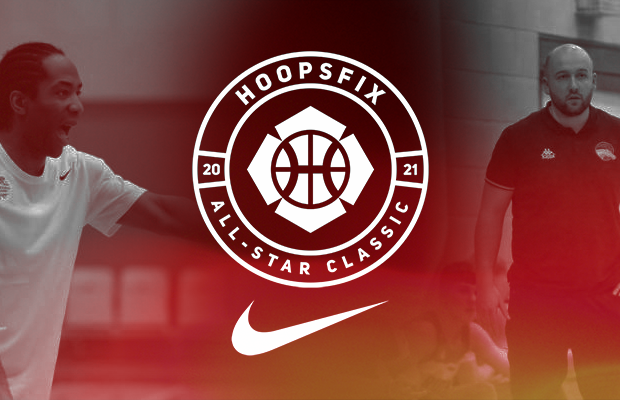 Chris Bourne and Will Maynard will go head-to-head on Saturday after being selected as coaches in the Under-19 Men’s game at the Hoopsfix All-Star Classic.

The duo have both made the transition from player to coach at their respective clubs and have emerged as two of the brightest coaching talents in the UK and will take to the floor on Saturday for the event that will be streamed live at HoopsfixAllStarClassic.com from 11:30am

Bourne ended his playing career with Bristol Flyers in 2017 and after a spell assisting head coach Andreas Kapoulas, he took the lead role of the club’s academy programme at SGS in 2019. Bourne has been involved in coaching with the National teams since 2015 having been assistant with GB Under-20s as well as serving as an apprentice coach for the England Senior Men at the Commonwealth Games in 2018.

“It’s a privilege to be involved in this event in any way,” said Bourne. “It’s such a great showcase for our best young talent and I’m really looking forward to being a part of it.”

Meanwhile, Maynard pursued a coaching career following a return from the US and began volunteering his services at Charnwood in 2015, assisting the side’s EABL triumph. The former Riders guard became the head coach at the start of the 2018-19 season and led the team to another EABL Championship as well as an Under-18 National Cup title and a bronze medal at the ISF World 3×3 event, whilst being GB Under-18s assistant.

He commented: “I’m really excited about the opportunity to coach at the Hoopsfix All-Star classic this weekend.

“After what has been a difficult season for most, it’s a privilege to be in the room with the best up and coming talent the UK has to offer. I’m looking forward to seeing the guys compete and showcase their talents.”

Bourne will lead Team White with Maynard heading up Team Black in the sixth edition of HASC in London this weekend – the rosters were announced on Monday.