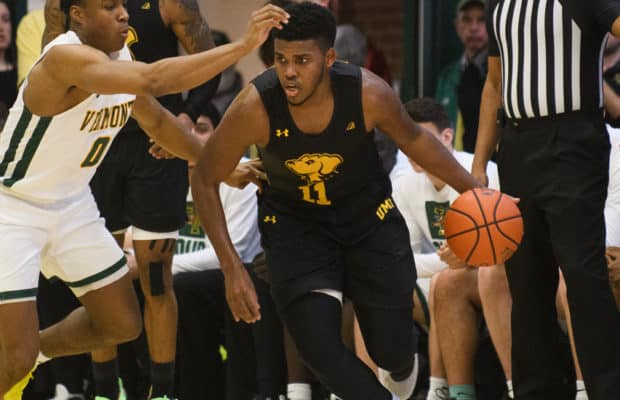 The 2019-20 college season was brought to a premature end with the global coronavirus pandemic, but there were several standout performances and successes from the Brits in the closing months.

There was a Championship title success in D1 for Micheal Anumba with the sophomore guard helping Winthrop (24-10) to victory in the Big South Conference. The Italian-born guard netted a season-high 13 points in his side’s opening win in the post-season tournament.

RJ Eytle-Rock saved his best performance for the final game of the season with a career-high 31 points as UMBC (16-17) were beaten in the semi-finals of the America East tournament with Dan Akin netting 10 points in a win against Hartford in February.

Kayne Henry was named to the All-OVC Newcomer team after averaging 10.8 points per game at Jacksonville State (13-19). The junior wing netted 20+ points for the third time in early February before later posting his fourth double-double with 19 points and 12 rebounds in a victory over Tennessee Tech to round out the regular season.

There were also end-of-season honours for Jubrile Belo as the sophomore made the All-Big Sky third team for Montana State (16-15) after finishing with a flourish. Belo posted 23 points and 11 rebounds before closing out the season with a career-high 25 points along with 11 boards then 24 points and 12 rebounds, in March.

Amin Adamu netted 20 points against Idaho State at the beginning of February and contributed 21 points, eight rebounds and five assists in a 10-point loss at Portland State having also averaged double figures in scoring on the season.

First time we’ve had a set of newcomers to score 340 points in their debut season in 15 years.

The pair from 🇬🇧 went off this year! #GoCatsGo pic.twitter.com/nf4VRcTiZ9

Nelson Boachie-Yiadom had a career night for Davidson College (16-14) with a first double-double with 11 points and 10 rebounds as well as five assists for a trio of career-highs. The sophomore forward later earned his first start, which sparked a run of five straight in a span that included back-to-back games with eight points and six rebounds – finishing the season shooting 68% from the floor.

Caleb Fuller finished strong at UC Davis (14-18) with a career-high 23 points coming on 9 of 12 shooting in an 81-87 road victory in February before netting 18 points in his final game, while team-mate Ade Adebayo recorded his scoring best with nine points to start the penultimate month.

Junior forward Robinson Idehen also enjoyed a career-night late in the season after recording a game-high 21 points along with 10 rebounds for season-highs in a defeat for UC Santa Barbara (21-10) against UC Irvine, in February – with the season cancelled before the Big West tournament.

“Robinson was outstanding tonight,” said head coach Joe Pasternack. “He just brings it every game and every day in practice. It doesn’t matter if he’s had a good day or a bad day, he honours the process and always brings the effort.”

Akwasi Yeboah opened February with back-to-back 13-point games for Rutgers (20-11) including in a 77-73 overtime victory over Northwestern and the graduate senior would finish the year averaging 9.8 points per game having also earned the Scarlet Knights’ Sportsmanship Award.

In his first start since November, Boban Jacdonmi finished his college career with seven points and six rebounds having battled with injury midway through the year with Southern Mississippi (9-22). Shaquille Walters went on a run of double digit scores in five of his last six games with Northeastern (17-16) including a season-high of 16 points at Drexel, whilst recording a career best of nine assists in the regular season finale before his side came up short in the conference title game.

Mate Okros nearly matched his season-high after putting up 13 points on 4 of 4 shooting in a 75-70 loss on the road for Drexel (14-19) with the freshman shooting above 40% from 3-point range on the season. Tosan Evbuomwan registered a season-high with 11 points coming in a defeat for Princeton (14-13) at Yale having started 19 of 26 games in his first year, while Tariq Balogun hit double figures for the first time since the season opener with 10 points for Eastern Kentucky (16-17).

After hitting double figures twice in the previous month, freshman Hosana Kitenge posted a personal best of 14 points without a miss in Feburary after going 6 of 6 from the floor off the bench in an 89-75 victory for Coastal Carolina (16-17). Zion Tordoff posted 12 points for Marist (7-23) as the forward closed out his junior year. 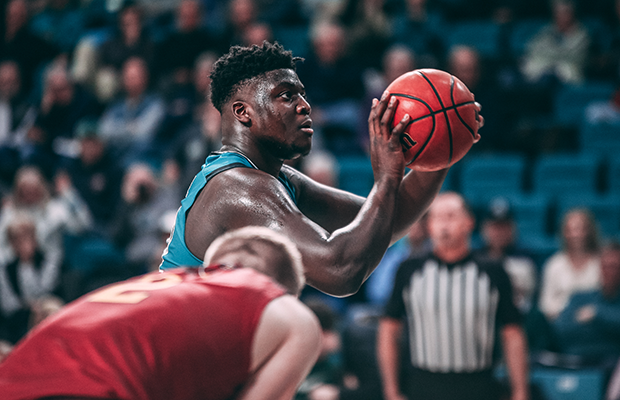 Danny Evans played a key role in success for Saint Anselm, scoring in double figures in eight of his last nine games including 11 points in the overtime victory over New Haven to claim the Conference Championship. The senior guard netted 16 points in back-to-back games in February with the Hawks winning their final 11 games.

This team is something special man 🏆📈 https://t.co/KljpLRp8vJ

Junior Jelani Watson-Gayle dropped a career-high 30 points for Miles (24-4) as they opened their post-season tournament before going on to add 22 points to secure the title in a win against Albany State – averaging an impressive 16.1 points per game on the season. The former Hoopsfix All-Star Classic MVP made the All-Second team and had set his personal best in February with 29 points coming at Kentucky State.

Niall Harris netted 13 points for Florida Tech (11-17) at the start of February before Sesan Russell continued his scoring prowess; dropping 31 points against Barry and then 34 in a tough loss at Florida Southern. The sophomore guard went on to score 28 points in his penultimate game and came off the bench with 27 points in a double overtime defeat against Rollins, though missed out on a team of the year selection. 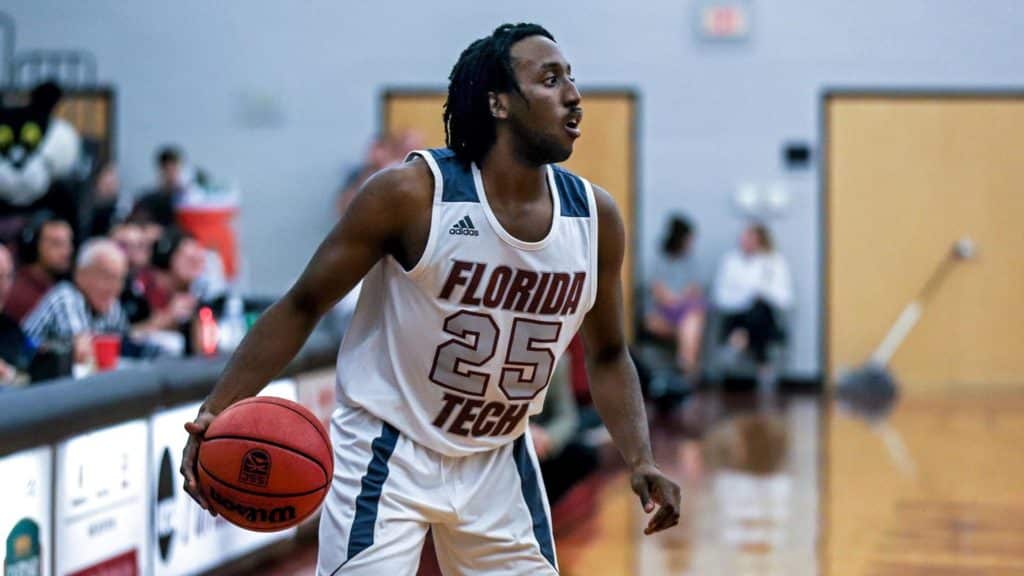 Gedi Juozapaitis was recognised for his displays at Flager (14-15) with a spot on the All-PBC first team, averaging 19 points per game as a sophomore. Another former Hoopsfix All-Star Classic MVP, Juozapaitis dropped 30 points on Augusta in February and scored 28 points against Lander before back-to-back 27-point games including a sixth double-double on the season.

Senior guard Evan Walshe returned from a spell on the sidelines with a season-high of 21 points on 8 of 9 shooting in just 21 minutes as Barry (18-10) defeated Rollins on the road, but they would fall in the first round of the SSC tournament – that would be won by Florida Southern (29-2) as Kaiyem Cleary celebrated the success as a medical redshirt due to a hand injury.

Andre Arissol finished his college career in double figures through his senior year at Chaminade (18-11), putting up 21 points in beating Point Loma before tying his career-high with 24 points in the opening game of the PacWest tournament. The Northampton native netted seven triples in the 90-64 victory with his side exiting in the next round, against Point Loma.

Romario Spence netted 13 points along with nine rebounds as Montevallo (12-17) fell to a heavy loss on the road before a return to the starting lineup resulted in a first double-double with the junior forward posting 12 points and 10 rebounds to close out the regular season. Fellow junior forward Joel Ufele netted eight points twice during the run-in with Mercyhurst (20-8) finishing the season strong.

Redshirt freshman Sean Nealon-Lino continued his run in the starting lineup at Fresno Pacific and fired in a career-high 23 points on 8 of 11 shooting to go with seven rebounds in a big 72-88 victory at Point Loma. He added 14 points in the next outing against Arissol’s Chaminade, while Jonathan Brown closed out his freshman year with 11 points as both players averaged 6+ points per game on the year.

Great to see @sean_nealon15 playing so well, one of the most competitive players we have ever had at @AbbeyBasketball not to mention of of our best ever shooters #AbbeyNation https://t.co/nk7SHIo1yt

Junior guard Sam Van Oostrum handed out 10 assists in a game for the third time in the season, whilst adding six points in an 89-83 victory for Franklin Pierce (16-12). Ola Ayodele posted a 2020 best of 12 points for Midwestern State (8-21) in February and finished his senior year with back-to-back nine-point games.

Patrick Lanipekun scored seven points for a season-high at the start of February then surpassed it in the next game with eight points in a 13-point road success for UC-Colo. Springs (17-11). Meanwhile, Adria Amabilino-Perez set a new career-high in his sophomore year with 16 points as Bentley (17-12) suffered a narrow three-point defeat, in overtime.