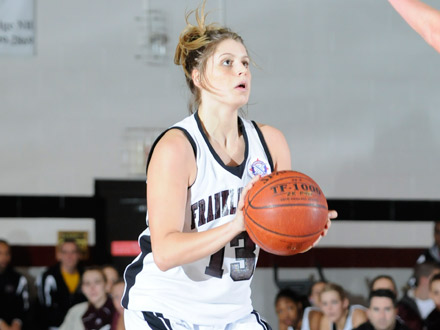 When in lockdown, raid the archives. We will be looking back on some memorable college careers by British players across the Hoopsfix websites.

Jo Leedham-Warner has become one of the GB greats and it is now a decade ago since cementing her name in the NCAA Division II record books at Franklin Pierce.

Here’s a brief recap of the first three years in Rindge, New Hampshire: 33 points, 10 rebounds, six assists and five steals in 29 minutes. As dominant as it gets as Leedham set the tone for another strong season to lead Franklin Pierce past Nyack in a 51-86 victory. In the next game, Leedham followed up with a 34-point haul against with her side starting 4-0 through November.

The wins kept coming and the points kept building as the Ravens closed out 2009 with 10 wins from 10 on the season. But it wasn’t just the scoring that made Leedham so valuable, it was the all-round contributions, particularly in December. Leedham started the month with eight steals (collecting nine a month later) before registering a career-high nine assists against Stonehill and then 16 rebounds to close out the year.

The big news: it's official, Jo Leedham is the all-time leading scorer in Ravens WBB history. 3Ptr w/ about a min left in first half set it

FPU continued their unbeaten run with nine more victories at the start of 2010 with the end of January coinciding with an incredible scoring streak from Leedham; starting with 31 points at Le Moyne. That started a stretch of four consecutive 30+ point games with a best of 35 as Leedham averaged 31.0 points per game in a seven-game span through February.

After a staggering 25-1 record to take the regular season title by storm, the Ravens advanced through the post-season tournament to be crowned champions for the second year running with Leedham firing in 31 points in the final against Stonehill. More success followed as Leedham netted 34 points to guide Franklin Pierce to another regional title as they battled past Holy Family in an 82-79 overtime triumph.

Leedham’s college career concluded one game too early with a defeat to Fort Lewis in the Final Four of the DII National Championship after being held to 13 points on 5 of 22 shooting. That still took the grand total of points to 3,050 to sit at the top of the pile in the history books as THE greatest scorer of all time in NCAA DII history.

In 2015, Leedham was inducted into the Northeast-10 Hall of Fame with deserved recognition of an illustrious career as a three-time Player of the Year, being named to the All-first team in each of the four seasons as well as earning National awards.

You can listen to Episode 23 of the Hoopsfix Podcast with Jo Leedham recalling her college career, below: