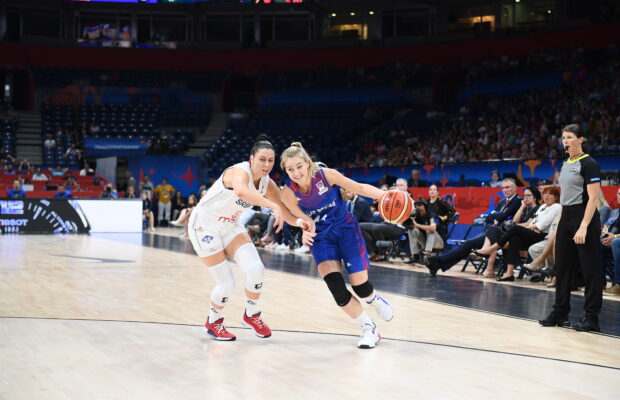 Great Britain Senior Women’s unbelievable run at FIBA Women’s EuroBasket 2019 ends without a medal after their 81-55 defeat to hosts Serbia, in Belgrade, on Sunday evening.

However, Chema Buceta’s side have not only gained the respect of their opponents by proving they can compete at the highest stage, but produced heroic performances to inspire the next generation.

One game too far in a tough schedule, bearing in mind GB only played four games at their last appearance in 2015 before heading out in the group phase.

Temi Fagbenle – still a candidate to make the tournament’s All-Star Five – led the resistance with 23 points, but it was a tough night where the shots just didn’t fall for the team’s red-hot shooters.

Serbia raced out to a 9-2 lead in an ominous start, but it was not going to be as comfortable as their quarter-final win over Sweden. GB responded, as they so often do, with a 15-6 deficit trimmed to a single point off the back of an 8-0 run.

This time it was the hosts’ turn to hit back with a 10-2 close to the opening period to lead 25-16. The same gap remained at 35-26 before another rally came from GB with four points from Fagbenle in a 7-0 run.

Serbia scored the final five points of the half to lead 40-33 at the break – the first time in the tournament GB had gone into the locker rooms behind. And, this time, they were unable to muster a response. Held to just six points in the third and the medal dream had faded.

The fourth followed a similar pattern with Serbia in complete control in cementing a spot on the podium in front of their home support.

For GB, they had gone way further than anyone expected. Raising the bar, believing in each other and forming a team to be proud of.

Onwards and upwards. A spot at the 2020 Olympics in Tokyo is still to be secured next February.