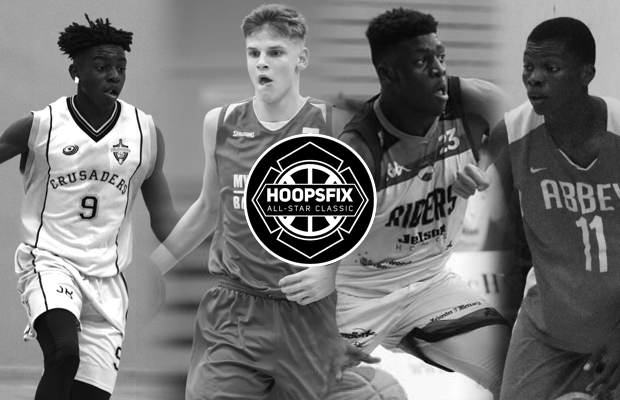 The rosters for the 2018 Hoopsfix All-Star Classic Underclassmen game have been revealed, featuring some of the best up and coming junior talent in the country (Buy tickets).

With a wealth of international experience, the game – tipping off at 2pm on Saturday June 2nd in Brixton – will shine a spotlight on players who have at least one more year of eligibility before heading to university. Click here to buy your tickets now!

Last summer’s Great Britain Under-16 captain Mate Okros suits up for the first time, representing Team Black after coming off a strong season with Myerscough that saw him named to the EABL West Conference Second Team as a year young.

7’0″ big man Theo Hughes, a Great Britain Under-16 last summer, and an EABL National Champion with Barking Abbey this season, will join Okros on Team Black, along with Myerscough’s Callan Low, who is fresh off a campaign with the Scotland Senior Men that saw him their youngest player at the 2018 Commonwealth Games, having been Scotland Under-18s’ leading scorer at the European Championships last summer.

He will go up against the likes of talented under-the-radar big man Ethan Price representing Team White, who is coming off a monster performance at the Junior Final Fours with Ipswich.

EABL All-East second team members Patrick Lanipekun from City of London Academy and Itchen’s Matthew Hughes will take to the floor, having both confirmed they will be doing prep years.

Lanipekun represented Ireland as an Under-18 in last summer’s Division B European Championships and was a standout performer in the EABL this season, whilst Hughes shone in the EABL, finishing amongst the league’s efficiency leaders, second in scoring, third in rebounding.

This season’s NBL Division 3 Men’s Player of the Year and Under-18 National Cup Champion Niall Harris will help out in the backcourt for Team White, along with England Under-18 and two time EABL National Champion Pierce Maslen, who will add some sharp shooting to the squad. Maslen will team up with Barking Abbey teammate and former England Under-17 Robin Bedford on Team White, where he will bring his craftiness to the point guard spot.

England Under-18 and EABL All-West Second Team member Arinze Emeka-Anyakwo will suit up for Team White, representing Loreto and Manchester Magic; where he has just won the Under-18 NBL title.

Great Britain Under-16 and City of London Academy 5’9″ guard Louis Norton-Cuffy will bring some excitement to the point guard position for Team Black, where he will be joined by the 6’6″ Tosan Evbuomwan, who will be travelling down from Newcastle. The England Under-18 also represented at Haris Memorial Tournament and has made people take notice with his accelerating development over the past season.

England Under-18 Conroy Hayden will be the sole representative from Birmingham, having averaged a double double for England at Haris over Christmas and in the ABL for Aston Manor this season.

Hayden will join forces with his teammate for England, and Barking Abbey power forward Nathaniel Delaney Powell on Team White, after he has turned heads this season, being named to the Haris Tournament’s All-Star 5 with a strong showing for the national team.

Former Lewisham Thunder and current England Under-18 Eljay Morris will suit up in the UK for the first time since departing at the beginning of the season to play at The Governer’s Academy in the US, also representing Team White, where he will be joined by Myerscough’s Jamie Gray, a skilled, athletic 6’8″ forward is expected to be a key contributor for Myerscough next season.

Long-armed Peter Turay, comes off a season where he finished amongst the EABL’s leading rebounders and is a former Under-18 National Champion with Southwark Pride, being called up to Team Black.

For a glimpse into the future, there are just two 2002 born players suiting up, one on each team. Both were named to the initial England Under-16s squad this summer; one of whom, Veron Eze, represented last summer. Veron Eze, is originally from Ipswich but returning to England after his first year with Italian side Stella Azzura, and Mansfield Giants’ Amari Williams, a long-limbed 6’8″ left-handed forward.

Tickets to the 2018 Hoopsfix All Star Classic are still available but selling fast, starting at just £5. Click here to buy now before they are all gone!

The Class of 2018 game rosters and coaching staff for all teams will be announced in the coming days.