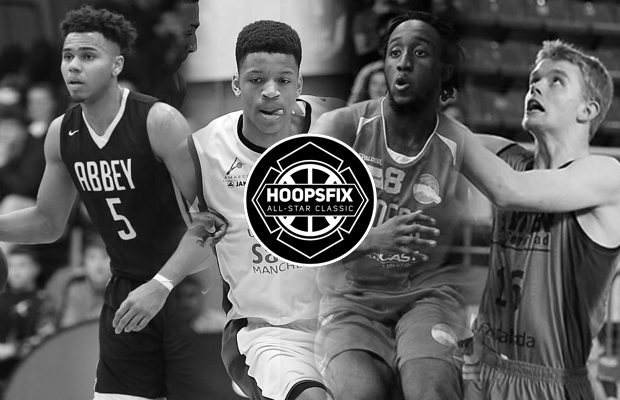 The rosters for the 2018 Hoopsfix All-Star Classic Class of 2018 game have been revealed, featuring a number of the top young basketball prospects in the country (buy tickets).

With countless national titles and a wealth of international experience between them, the game – tipping off at 4pm on Saturday June 2nd in Brixton – will shine a spotlight on players who are heading to university next season. Click here to buy your tickets now – we are at well over 50% capacity and on track for a sell out!

In a testament to the level of talent on display, 13 of the 22 players have already signed for athletic scholarships in the US next season, with others sitting on offers and yet to make their decision.

Team White will be led by Charnwood, Great Britain Under-18 guard, EABL West Conference Player of the Year and NBL Division 1 Men’s league winner, Sesan Russell, whilst he will match up with six time National Champion, and four time Finals MVP Michael Anumba from Manchester on Team Black.

Fresh off a prep year at Barking Abbey, EABL National Champion and Finals MVP Caleb Fuller will add firepower to Team Black, whilst fellow Great Britain Under-18 Jacob Round will return from Spain where he plays with Fuenlabrada, to suit up for Team White, along with Kent’s Tyrese Walters-Lawrence who comes off a tumultuous season recovering from a stabbing.

In the Team White backcourt, Round will be aided by another overseas based player, Cameron Bett, who will be flying in from Canada where the former England Under-16 is finishing his time at Ridley to head to University, along with Thames Valley’s Robert Banks, this season’s NBL Division 2 Men’s Finals MVP and England Under-18.

Barking Abbey sharp-shooter Sean Nealon-Lino will be one of three Scottish representatives in the game. The former Scotland Under-18 is coming off an impressive campaign with the Senior Men at the Commonwealth Games on the Gold Coast, and will be joined by exciting Myerscough guard Konrad Kantorski, also a Scotland Under-18, and 6’8″ big man Alex Ferguson who is also a Scotland Junior international and most recently EABL National Champion with Barking Abbey.

Two time ABL Conference Player of the Year Eisley Swaine, who has also been one of the top performing juniors in NBL Division 1 Men’s this season with Bradford Dragons will join Kantorski in the Team Black backcourt, whilst England junior international Josh Edwards will be returning from the US after a prep year at DME Academy.

Former Hoopsfix All-Star Classic MVP Gedi Juozapaitis will be back in the UK after a prep year at Woodstock Academy in the US, where he was named All-Conference and Finals MVP for the Power 5 AA conference.

The super-athletic Jordan-Reece George, from Oaklands College, will be showing off his bounce for Team Black after a breakout season which saw him named to the EABL All-East First Team, and being amongst the league leaders in a number of different statistical categories.

In the front court for Team Black, will be the Charnwood College’s Morgan Carter, a versatile Welsh junior international forward, EABL National Champion and NBL Division 1 Men league winner, plus Itchen big man Ashley Briggs, a former England Under-16 who was one of the EABL’s most efficient players this season, and John Madejski Academy’s Alex Drincic, who came out of nowhere to finish top 5 ranked at 2017’s Deng Top 50 Camp.

Meanwhile, Elliot Bailey will provide range as a stretch four after an effective season as captain for Canterbury in the EABL, leading them to their best ever finish.

Brian Amabilino-Perez will be returning after a prep year in the US at Avon Old Farms, where he was named New England honourable mention, and the former Great Britain Under-18 will be joined by his former Derby running-mate Leighton Elliott- Sewell. Elliott-Sewell was named to the EABL All-West First Team this season after an impressive year with Derby.

Meanwhile, Micah Savery-Richards joins after an EABL National Championship season with Barking Abbey, and having helped the Great Britain Under-18s to Division A promotion last summer.

Ipswich and Welsh big man Jonny Hall will man the middle for Team White after a monstrous EABL season that saw him lead the league in scoring, and finish second in rebounding to be named to the East All-First Team.

Carl Ntifo will provide athleticism between the 3 and 4 spot, having done a prep year at DME Academy with Josh Edwards and impressing at Deng Camp at the end of last year.

With the all the players on the day across both games having now been revealed, 17 of the current Deng Top 20 ranked players are suiting up.

Tickets to the 2018 Hoopsfix All Star Classic are still available but selling fast, starting at just £5. Click here to buy now before they are all gone!

The coaching staff for all teams will be announced in the coming week.