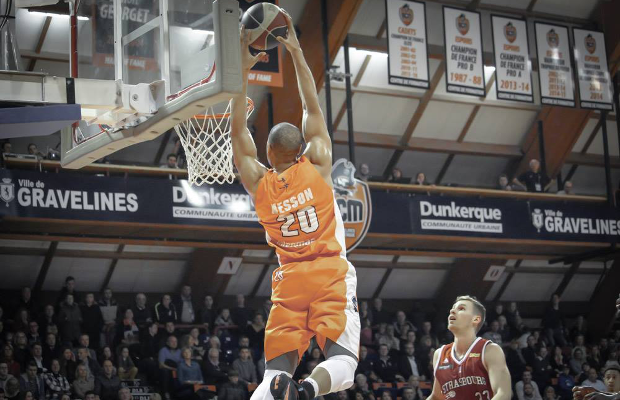 We’re now a month into the new seasons overseas with a number of top Brits flying the flag overseas. Here’s a catchup on how they’re getting on as we start our weekly round-up..

A new chapter for Luol Deng this season as he begins life in Los Angeles with the Lakers. The 31-year-old is averaging 6.8 points and 6.4 rebounds so far including two double-doubles with 13 points and 10 rebounds in a 116-123 road win at Atlanta Hawks.

Luol Deng has his second double-double of the season with 13 points and 10 rebounds. pic.twitter.com/XMOmCufbql

Myles Hesson has started his second season in the top-flight in France as a regular starter for Gravelines, who have made a 3-4 start. The GB forward is averaging 9.7 points per game whilst shooting 35% from the field. Hesson’s best display consisted of 16 points and seven rebounds in an opening 75-62 loss on the road, and he also netted 16 points against his former club, Dijon.

In FIBA Europe Cup action, Hesson is averaging 12.2 points and 5.2 rebounds per game with Gravelines having had a 19-point outing in Round 3 as well as 15 points and five boards in a win earlier this week.

Ryan Martin is playing in his rookie pro season in Pro-B and is averaging 3.3 points per game early on for league leaders, Provence with a best of nine points and six rebounds coming in a 74-70 victory. Laurence Ekperigin is putting up 7.0 points and 6.5 boards per game for Nantes, while Eric Boateng has just re-joined Blois having helped them to the NM1 league title last season.

Ovie Soko impressed in pre-season and began the ACB campaign with 11 points and nine rebounds in a 67-65 win for Murcia against Joventu. The third-year pro also reached double figures with 10 points but his new side have lost four on the bounce and are currently 2-5 in Liga Endesa, whilst being 2-2 in the EuroCup.

In LEB Gold, Aaron Geramipoor has helped Breogan off to a strong 6-2 start having averaged 9.0 points and 4.6 rebounds per game in seven appearances so far with a season-high of 13 points in a dominant 113-50 success.

GB Senior Ben Mockford produced his best display with 14 points in a recent 107-95 loss for Palma (4-4), while Mo Soluade is averaging just under eight points per game along with 2.6 assists as a starter for Burgos – who are also 4-4 with Jules Dang Akodo seeing limited court-time as well as playing in the EBA.

Jack Crook exploded for 26 points and 14 boards on 10-14 shooting to inspire an 87-75 win for Agustinos-Eras in his second game as a pro in LEB Silver. The Seattle graduate is putting up 10.1 points and 8.6 rebounds on average, but his side have a sole victory from seven.

Meanwhile, Will Hall has helped Avila into the top four with a 5-2 record having averaged 12.1 points per game so far, while Matthew Don has 8.6ppg along with 6.4rpg with Cambados also off to a 5-2 start. Rowell Graham has made a solid start at Valladolid, averaging 9.7 points and 5.5 rebounds per game including a 23-point outing in a road win against Gandia. The former GB U20 forward also did THIS during the win.

There are now no less than five Brits playing in the Greek top-flight.

Devon Van Oostrum is beginning to hit his stride for Koroivos despite their 1-4 start with the 23-year-old netting back-to-back 18-point games whilst shooting over 40% from 3-point range so far. Having originally joined Union Olympija in Slovenia, Justin Robinson is back in Greece and averaging 12 points per game for Doxa Lefkadas, who also have one win from four.

Jesse Chuku is playing his rookie season as a pro for Kolosso and has contributed 6.2 points per game to their 2-3 start with Ashley Hamilton back at Lavrio and one of the leading scorers, averaging 9.2ppg, while Ogo Adegboye has one appearance to his name after joining Kymis.

Meanwhile, Fahro Alihodzic and Rob Gilchrist are back in A2 again this season, albeit with two new teams. Alihodzic has helped Panionios off to a perfect 5-0 start with 12.6 points and 6.0 rebounds per game including a 20-point haul on 8-11 shooting at the end of October. Gilchrist is also averaging double figures in points, but has one win from five so far with Holargos.

Dan Clark joined MZT Skopje in mid-October and made an immediate impact with 23 points and eight rebounds on his EuroCup debut. The GB forward recently starred with 22 points to help lead his side to a comeback 97-96 victory in the Adriatic League where he is averaging 11 points and five rebounds per game in three outings so far.

Ryan Richards is also out in Macedonia having been cut in training camp by San Antonio Spurs and is putting up eights points per game in the ABA for Karpos Sokoli with a season-best of 13 points in his side’s recent 67-62 road loss.

Andrew Lawrence is continuing his good form from the summer with GB in the FIBA Europe Cup and after nearly recording a double-double on his debut for Sigal Prishtina, he recently poured in 33 points in an agonising overtime loss. Prishtina are 3-2 in the Kosovo Superleague with Lawrence averaging 7.8 points and 5.3 assists in four appearances so far.

Dzaflo Larkai returned to Japan following spells at Leicester Riders and Manchester Giants in the BBL and is averaging 6.7 points and 4.8 rebounds per game as Ibaraki Robots have made an 8-6 start in the B-League D2.

Matthew Bryan-Amaning is averaging 16.3 points per game in the third division having had a run of four straight games with 20+ points. The recent Championship winner in Mexico and Argentina has helped Rizing Fukuoka off to a 9-1 start so far.

Teddy Okereafor was one of the latest GB Senior players to secure a contract after heading out to Estonia to join Parnu on a short-term deal to begin his pro career. The Rider University graduate started well with 15 points and nine rebounds on his debut in the Baltic Basketball League, although his side went down 64-72 at home to drop to 0-3.

Justin Sears may not be an overly familiar name but the rookie was named to the initial GB Senior roster this summer and is currently averaging 12.3 points and 6.5 rebounds in the German BBL. Meanwhile, Ali Fraser is putting up 10.4 points, 5.6 rebounds and 2.1 assists on average in Pro-A, although Ehingen have started 2-7.

Once again, there a number of Brits plying their trade in the Regionalliga divisions including Kofi Josephs starting out his pro career with Hertener-Loewen, where he’s averaging 17.3ppg alongside James Chute and Nathan Schall on the roster. Louis Sayers and Shore Adenekan are also suiting up together at Koblenz, while Josh Guddemi has made a strong start at Vilsbiburg with 11ppg and 7.1rpg.

Almost immediately after the GB Senior qualifying campaign was over, Gabe Olaseni headed to Italy to join up with Dinamo Sassari – where Ryan Martin had provided cover during pre-season. The second-year pro is averaging 8.0 points and 5.3 rebounds per game as Sassari have started 4-2 in Serie A as well as playing in the Basketball Champions League.

Also, highly-rated junior Carl Wheatle has made the step up to the senior team with Angelico Biella in Serie A2 this season and is averaging 21 minutes per game and had a season-best of 14 points off the bench in one of his side’s five wins from six.

After two seasons in the BBL at Leeds Force, Zak Wells has ventured to Europe and made his debut in Slovenia’s top-flight with nine points in 18 minutes of an 80-91 road win for Hopsi Polzela – who are now 4-1 in Liga Nova KBM. In five games, Wells is averaging 6.2 points and 3.4 rebounds in 17.4 minutes per game.

Another pro rookie, Chris Tawiah is making solid contributions for J Hradec with 5.2 points and 5.5 rebounds per game averaged so far with his new side currently 3-7 in ninth place in the top-flight.

Chris Caird is back in Iceland for his second season as a pro and started the season with nine points and four assists for his new side, Tindastoll, but they fell to a 98-78 loss in the Dominos League. The sharpshooter is averaging 16+ points per game having put up a season-high of 26 points in a win on the road.

Nigel Van Oostrum has spent the past couple of years in the Netherlands and is enjoying a successful start to his time with Zwolle – who are top with a 6-0 record. The all-round guard is averaging 5.0 points and 3.2 assists per game as he looks to make vital contributions at both ends of the floor.