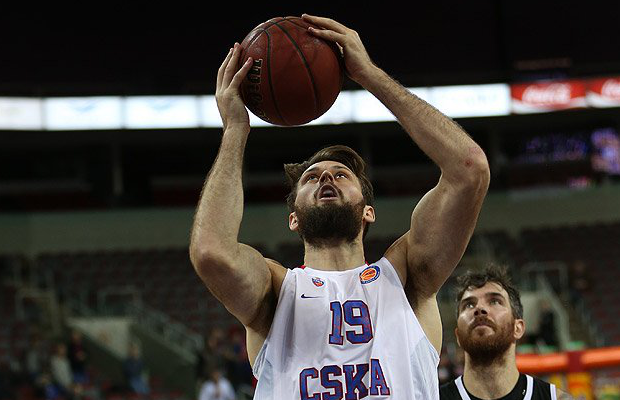 After missing six straight games in the NBA through injury, Luol Deng made his return with five points and six rebounds in a 99-81 defeat against the Charlotte Hornets.

Joel Freeland (pictured) made his long-awaited season debut following a calf injury and he pulled down three rebounds in six minutes of a 77-92 road win in the VTB league for CSKA Moscow (9-1). In Iran, Ryan Richards posted a 24-point, 12-rebound double-double, but Gorgan (6-4) suffered a 78-72 defeat on the road.

Soles (17-1) keep rolling on in the LNBP league in Mexico as Matthew Bryan-Amaning continues to dominate having racked up a huge 29 points in a 100-78 victory against Santos, before backing that up with 31 points and 14 rebounds in a following 91-77 success. MBA also had 15 points and 12 rebounds in a 73-71 win over Abejas with Tafari Toney in opposition, finishing with 9 points and 13 rebounds. Aaron Geramipoor hit double figures in three of the four wins this past week including 15 against Abejas.

Myles Hesson shot 5-of-9 from 3-point range on his way to 24 points and also added six rebounds and three assists in an 89-75 Pro-A division victory for Dijon (7-3). In Pro-B, Laurence Ekperigin went 9-of-11 in a 22-point display along with seven boards to help Poitiers (2-5) to an 82-88 road victory. Elsewhere, Eric Boateng scored his only field goal attempt and collected seven rebounds in a 69-59 win for Blois (10-2) as they remain top of the NM1 standings.

There was a battle of Brits in Liga Endesa action in Spain as Dan Clark poured in an efficient 21 points and added six rebounds to help lead Andorra (4-5) to an 88-70 victory at home against Gipuzkoa (0-9), featuring Andrew Lawrence. In LEB Silver, Mo Soluade dished out five assists to go with 13 points as part of a balanced scoring effort that saw Clinicas Rincon (4-6) to an 81-58 success.

Rookie Gabe Olaseni recorded the first double-double of his pro career after contributing 14 points and 12 rebounds to a 78-87 road win for Giessen 46ers (5-6) in the German BBL. Chris Caird helped lead FSU to a 100-110 victory away from home with 27 points, seven rebounds and seven assists, while one of his team-mates had a scintillating 36 points and 30 rebounds.

Devon Van Oostrum produced an impressive 24-point haul to lead Arkadikos (3-6) to a 98-90 win at home in the Greek A1 league. Meanwhile, British pair Ovie Soko and Justin Robinson hit double figures as Trikala (3-6) went down fighting 77-64 away at the unbeaten leaders, and Euroleague side Panithanikos. Soko finished with 13 points and 10 rebounds, while Robinson added 11 points.

Elsewhere in Greece, Fahro Alihodzic had six points and six rebounds in an 87-67 win for Promitheas (7-3) in the A2 league, while Robert Gilchrist scored 15 points and added seven boards in a 100-61 defeat for Peristeri Athens (1-5). In the Netherlands, Nigel Van Oostrum dished out a total of 15 assists in two defeats for Leeuwarden (3-6), while Ali Fraser scored eight points in the 100-70 loss at the weekend.

Ashley Hamilton shot 5-of-7 from the field on his way to 16 points as Matera (2-9) fell to a 62-68 defeat in the Italian Serie A2, while Will Saunders had six points and seven rebounds in a 73-68 loss for Novipiu Casale (7-4). In Slovenia, Jules Dang Akodo scored nine points and had two steals in 24 minutes as LTH Castings (5-1) recorded a 78-70 win to move back top in the Telemach top-flight standings.

Notes: Ogo Adegboye has joined Italian Serie A side JuveCaserta, who have a 4-6 record.