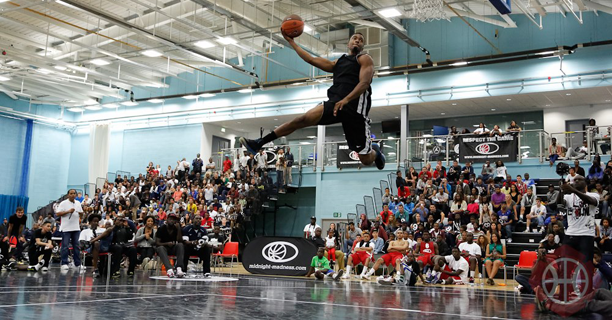 The biggest event of the summer, Midnight Madness Finals Night, is upon us – taking place at the Copper Box Arena in the Olympic Park on Sunday 31st August from 4pm (doors open at 3pm).

It is the culmination of four qualifiers across the country, an all-nighter, and a Boot Camp, which will see the best 20 players in each division (Under-18, Under-23 and Over-23) left standing take to the blacked out floor in front of thousands of fans in East London.

They will be playing for a place on the Midnight Madness Select Travel Team, who this year will be heading to the sun and sand of the Caribbean, representing the UK on the tropical islands of St. Kitts & Nevis to compete in the first annual Independence Classic Basketball Tournament.

In the Under-18s, Jules Dang Akodo will lead the pack, continuing his strong summer after being named the number 1 player at the Deng Top 50 camp, as well as fellow junior internationals Dwayne Lautier-Ogunleye, Dwayne Orija, and Calvin Kintu.

While the over-23s will see Matthew Bryan-Amaning suit up, fresh from the GB Senior Men’s summer campaign.

Meanwhile, the world’s best dunkers have been flown in especially; including Poland’s Lipek, Justin ‘Jus Fly’ Darlington, Dmitry ‘Smoove’ Krivenko, and Porter Maberry, there will be live performances from the likes of the Voice winner Jermain Jackman and a 2K Sports gaming zone – giving you the FIRST opportunity of anyone to play NBA 2K15!

This is an event NOT TO BE MISSED!

As an official partner of Midnight Madness in 2014, Hoopsfix can offer readers 50% off the price of your tickets through buying tickets here. Get them now!