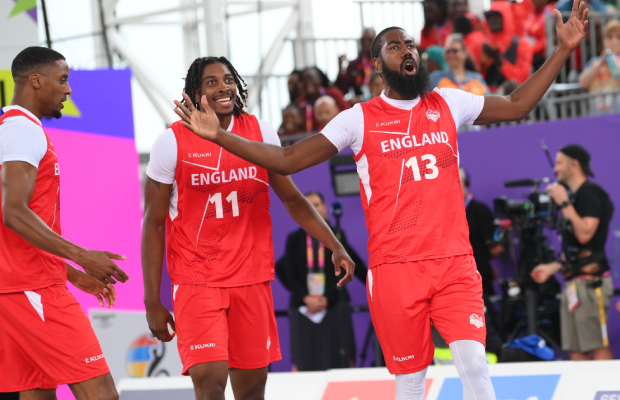 Check out the men’s 3×3 basketball recap at the 2022 Commonwealth Games as the action heats up in the battle for medals in Birmingham.

For the full schedule, see HERE.

Here’s what has happened so far:

Scotland made a strong start to the tournament on Friday as they picked up two wins in Group A.

Fraser Malcolm starred in their opening success as the leading scorer in helping his side pull away to record a 16-9 victory over Sri Lanka – a result that was punctuated by Gareth Murray’s putback poster.

A more challenging contest with Canada followed in the evening with Malcolm again leading the way with nine points. However, it was Kyle Jimenez who had the decisive say with a dramatic game-winner sealing a 21-20 triumph to end a thrilling back-and-forth tussle.

If Scotland laid down a marker on Day 1, then England certainly did when they started their campaign in style on Sunday.

England stood firm in the face of the Tall Blacks’ pre-game Haka and then let their basketball do the talking as Orlan Jackman impressed with nine points in a dominant 21-10 victory.

They were even more convincing in the evening session with Jamell Anderson and Kayne Henry exciting the crowd on their way to an emphatic 21-6 success over Trinidad and Tobago. Hometown hero Myles Hesson put the finishing touches on the win with a nasty poster to end up with nine points in the win.

Scotland advanced directly to the semi-finals as they sealed top spot in their group by beating Kenya 15-14. They trailed for the majority of the contest, but used the hot hand of Gareth Murray to move ahead in the final few minutes and held on for the win.

It was a straight shootout for top spot between England and Australia and the hosts never trailed on their way to a 17-12 triumph to advance to the semi-finals. Myles Hesson – who top scored with eight points – connected from outside to make it 7-4 before a big and-1 play from Orlan Jackman helped keep their opponents at bay.

It’s a straightforward scenario for England as they have a straight shootout for top spot – and a place in the semi-finals – when they take on Australia in the penultimate game of the day.

Scotland will face the winner of the Australia-Kenya quarter-final in the semi-finals, while England await either Canada or New Zealand in the last four.