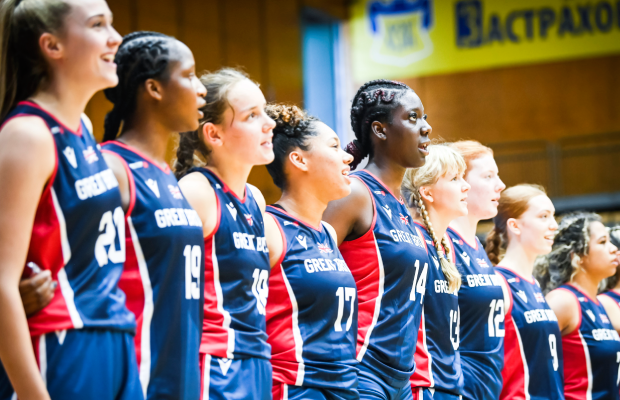 GB’s Under-18s suffered a 69-61 loss against Luxembourg in their opening game at the FIBA U18 Women’s European Championship, Division B in Sofia, Bulgaria, on Saturday.

Kenrick Liburd’s side need a top-two finish in Group A to advance and will need to regroup and bounce back heading into a run of three straight games from Monday.

Leia Edwards was the leading scorer, in GB’s first appearance at the tournament in 1,112 days, with a double-double of 20 points and 11 rebounds along with three steals, while Katie Januszewska added 11 points and eight rebounds.

Edwards set the tone by scoring in the first possession, while Grace Strickland would later make an immediate impact off the bench with a three amid a low-scoring start. Luxembourg put together a 6-0 run as they capitalised on GB turnovers – eight in the first quarter – before Janneh’s triple helped level the score at 14-14.

Januszewska scored five points in quick succession to push GB ahead, but Luxembourg hit back with a 9-1 response. Edwards added five more points to her own tally to move into double figures as GB trailed 34-31 at half-time.

The Sierra Canyon prospect continued to get it done at both ends with Januszewska adding a three with the duo combining again to help GB build a five-point advantage.

Luxembourg again responded with the next six points, while Clem Odom restored the advantage after coming off the bench, but there was nothing to separate the two sides as they headed into the final quarter locked at 50-50.

Liv Forster opened her account from beyond the arc at the start of the fourth, but it was Luxembourg who finally made a decisive move with an 8-0 run capped by back-to-back threes to make it 62-56. Januszewska stopped the rot and another Forster triple halved the deficit inside the final minute, but GB came up short.

Faith Etute was a problem throughout after finishing with 27 points, 18 rebounds, seven steals and three blocks in the win for Luxembourg.

– GB’s next game is against North Macedonia on Monday at 4:15pm UK time
– GB’s starters: Charity, Forster, Januszewska, Janneh, & Edwards
– Three players (Bunyan, Janneh, Januszewska) were part of the GB U16 squad in 2019
– GB lost 38-36 in their previous encounter with Luxembourg at the 2019 tournament