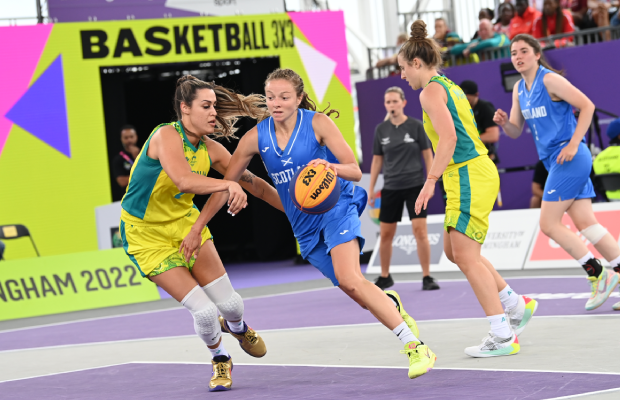 Check out the women’s tournament recap at the 2022 Commonwealth Games as the action heats up in the battle for medals in Birmingham.

For the full schedule, see HERE.

Here’s what has happened so far:

Scotland had a tough start to their debut tournament before bouncing back in the evening session.

They made a bright opening to their game with Australia with Kennedy Leonard scoring five early points before they were eventually beaten 21-9 by the title favourites – Claire Paxton was perfect inside with the trademark fadeaway.

Scotland returned to the court later on and picked up a first win in dominant fashion as they eased past Sri Lanka in a 21-5 success. Leonard pulled the strings with eight points and eight rebounds with all four players made important contributions in a morale boosting win.

It was the turn of England to get underway on the second day, and they too had mixed results.

England would suffer a heartbreaking opening loss to New Zealand as they claimed a 15-14 victory in the final seconds after Chantelle Handy had tied the game from outside. Cheridene Green went to work inside with seven points, but England came up short in cruel fashion.

Just like Scotland, there was a response under the night-time lights as Hannah Jump caught fire with seven two-pointers to fuel their 22-5 comeback win over the British Virgin Islands. Green added six points with England rarely troubled as their stifling defence caused their opponents problems.

Scotland came from behind to defeat Kenya 21-17 as they claimed second place in the group with their second win. Claire Paxton caught fire early on before Kennedy Leonard took over down the stretch including a go-ahead and-1 play and the game-clinching free throw.

In the evening session, England again used their outside shooting as a platform for success with a 21-17 victory over Canada to seal second place in their pool. Hannah Jump knocked down a trio of two-pointers to help forge a 12-5 advantage and England were able to hold off a late fightback with Shanice Beckford-Norton sealing the win.

Scotland face Canada in the quarter-finals with the winner taking on New Zealand, while England come up against Kenya for the right to meet Australia in the semi-finals.