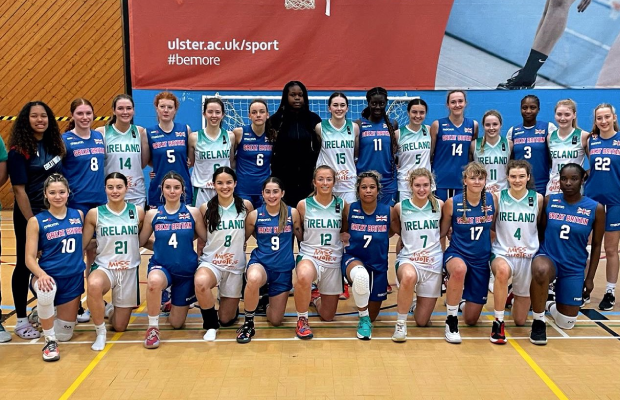 Great Britain’s Under-18 Women have begun their preparations for the upcoming European Championship this summer with a three-game series against Ireland Under-20s.

Head coach Kenrick Liburd has taken a squad of 15 players for the trip to Ireland with Violet Stutz unavailable having been included in the initial training camp squad.

Ireland are competing in Division A at the U20 Euros this summer having earned promotion with victory over GB in the bronze medal game back in 2019 – the last time the tournaments were held.

GB opened the series with a six-point success on Friday night, at Ulster University, after coming through a hard fought battle against older opposition.

Fatmata Janneh top scored with 16 points in the win with Issy Bunyan, Olivia Forster and Grace Strickland all adding eight points apiece with nine players on the scoresheet in total.

The visitors were 6-2 behind early on before Bunyan’s and-1 sparked a 7-0 response to take the lead. Janneh scored five late points to put GB 20-14 ahead at the end of the first, but were held to just seven points in the second as they trailed 28-27 at the break.

Janneh hit GB’s first three early in the third to move into double figures with Carys Roy and Grace Strickland connecting well on more than one occasion. Olivia Forster hit back-to-back threes before Janneh added another as the lead briefly hit double digits as GB led 58-50 heading into the fourth.

GB moved 61-53 ahead with 6:33 remaining, but had almost five minutes to wait before their next points as the hosts closed in. Despite a nervy finish, Strickland’s steal and score was enough to ice an opening win for GB.

GB dropped the second game of the series as Ireland forced a decider with a convincing 80-63 victory, on Saturday evening.

Issy Bunyan top scored with 13 points in the loss with Katie Januszewska – who did not play on Friday – and Grace Strickland both added 10 points apiece, while Natalie Charity scored nine points and Leia Edwards had seven.

Charity opened the scoring for GB in a 9-4 start that included a three from Bunyan as they settled quickly. Further triples came from Strickland and Edwards during a 16-5 run to establish a 12-point lead before Ireland’s 7-2 close made it 27-20 after 10 minutes.

Bunyan’s corner three pushed the lead back out to 11, but GB would have to endure a frustrating spell as 16 unanswered points from the hosts swung the momentum in their favour. Carys Roy stopped the rot from the foul line with GB trailing 38-32 at the half-time interval.

Ireland began to take over in the third; capitalising on multiple GB turnovers and dominating inside. The gap quickly ballooned to 23 points with GB outscored 33-16 in the quarter as they continued to look at different rotations.

GB rallied with a more competitive fourth as they fought on both sides of the floor as they reduced their arrears to take the final quarter 15-9 with Tunmise Salu scoring her first points of the series.

GB were unable to come away with the series victory against Ireland Under-20s after falling to a high-scoring 101-90 loss in the Game 3 decider.

Fatmata Janneh was unstoppable in the first half with 27 points before not returning to the court, while Katie Januszewska and Grace Strickland both netted 10 points each.

The visitors trailed 11-5 early on before seven straight points from Janneh put them ahead. Charli Wroe kept GB in front midway through the period, but Ireland responded with a 16-3 spell to take control as they would lead 33-22 after 10 minutes.

Janneh continued to be the focal point of GB’s offence as they whittled away at the deficit to trail 51-45 at half-time, and then made it a two-point game through Erin Powell and Strickland. However, another big Ireland run was costly as they outscored GB 19-4 in the middle of the third and took a 13-point lead into the final period.

Strickland and Januszewska both hit triples in the fourth as GB put up 27 points in a frantic finish, but they could not quite claw back the double-digit gap.

GB will continue their preparations at camp before travelling to Serbia the following week for more friendlies.