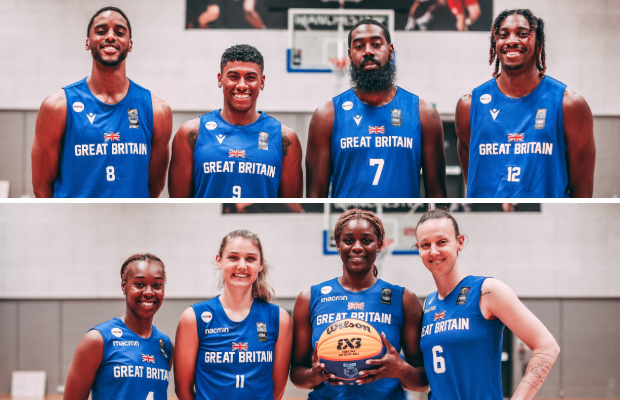 Great Britain have confirmed its rosters for the upcoming FIBA 3×3 Europe Cup Qualifiers in Romania this weekend.

The teams were selected following the camp held in Manchester this past week with the qualifiers taking place on 4-5 June.

The women’s side qualified for the final tournament in 2021 with Shanice Beckford-Norton, Chantelle Handy and Cheridene Green all returning, while NCAA champion – and former England junior international – Hannah Jump makes up the quartet for Stef Collins’ side.

“It’s been a successful few days in camp,” said Collins, via release. “We’re really pleased to see how the squad has progressed within such a short space of time as we continue our preparation for our 3×3 debut in the Commonwealth Games.

“We look forward to the challenge of the FIBA Europe Cup Qualifiers as we compete with the best in Europe and carry our preparations onwards to Serbia which will be another fantastic opportunity to learn, adapt and grow as a squad.”

“I’ve been very impressed with the talent that we’ve seen this week,” added Joseph, via release. “The guys have grasped the 3×3 strategies very well and made a tremendous amount of progress.

“I’m pleased with the foursome we have going to Romania for the Europe Cup Qualifiers and we’re looking forward to the challenge. I’m happy with the group and confident in their ability.

“Looking forward to the Commonwealths with England we’ll have a group of six to announce soon and within that group there’s scope for movement ahead of our finals Games selection.”