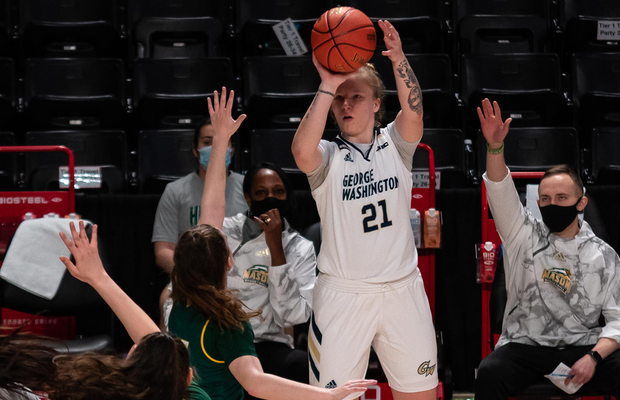 We take a look at how the majority of the leading Brits in college finished their seasons with a look through the busy periods of the final two months.

Hannah Jump won the PAC-12 regular season-Championship tournament double with Stanford (25-2) as they earned a #1 seed in the NCAA Tournament. The sophomore guard netted a season-high of 17 points during February and hit 14 points with four triples in back-to-back games to close the regular season and open the post-season.

Emerald Ekpiteta continued her run of double-doubles for FIU (13-12) at the start of February and had a best of 20 points and 11 rebounds in a C-USA Tournament quarter-final victory. Kyla Nelson netted 19 points during February’s action before opening March with 20 points along with eight rebounds to close out the regular season.

The Panthers will play in the Women’s Basketball Invitational with their first game against Northern Arizona.

Megan Jones saw limited action late in the season as UC Davis wrapped up the regular season title before going on to win the Big West Championship with a 61-42 victory over #2 UC Irvine.Emily Stradling celebrated winning the Southern Conference Tournament with Mercer (19-6), playing three minutes in the 60-38 Championship win over Wofford.

Meanwhile, Gabby Nikitinaite opened February with a season-best of 11 points before doubling that effort with 22 points off the bench for George Washington (9-14) to close out the month. The redshirt junior added 16 points in March to help her side to victory in the first round of the Conference Championship.

Savannah Wilkinson had six points without a miss and four rebounds in a loss with Florida State University (10-8) before finishing regular season with best of eight points along with four rebounds and a block in 59-51 win over Wake Forest to lock up the fourth seed for the ACC tournament. The GB forward also had eight points and six rebounds and three assists in an agonising one-point loss to Syracuse, though they will still compete in the NCAA Tournament.

Khaleah Edwards hit double figures on four occasions during a busy month for Wagner (13-6) with a best of 15 points as part of a winning double-header to open February. The senior guard/forward had back-to-back games with 17 points in March before netting 16 points in a 70-57 win over the #3 seed in the NEC Tournament, though Wagner would suffer a 32-point loss in the Championship game.

Precious Adediran matched a season-high of six points at Utah Valley, whilst collecting a best of six rebounds before later returning to the starting lineup in consecutive games for Chicago State (0-14) in February. Jenelle Grant got the start on senior night at Purdue (7-16) with nine points and six rebounds and two assists in 17 mins of 70-66 win over Illinois.

Elsewhere, Ruchae Walton had a career night consisting of 12 points along with six rebounds in the start for Portland State (12-13) in an 83-41 non-conference victory, and they would go on to lose to the #1 seed in the Conference Tournament quarter-finals.

Maya Hyacienth enjoyed a strong finish to the regular season with 14 points in a loss to Niagara before firing in 17 in an avenged 68-54 win for Rider (8-18). The sophomore guard posted a first double-double to open the MAAC Tournament with 11 points and 12 rebounds, and also netted 10 points in the semi-final defeat.

Loren Christie returned from an injury in March as Buffalo (15-9) made it to the semi-finals of the MAC Tournament before bowing out.

Harriet Swindells had a five-game stretch for Barry (5-6) with at least 13 points with a best of 20 off the bench in March. The senior guard returned to the starting lineup with an 18-point haul against Florida Tech. Fellow Brit Ashleigh Pink had opened the season with 9-6-4 and hit double figures for the first time with 11 points for Barry in their penultimate regular-season game.

Junior guard Alix Henderson scored 10 points in three of four games with a 14-point haul in between for Point Loma Nazarene (8-6) in February, while Charlotte Ellmore had a best of 15 points, 10 rebounds and four assists for West Florida (9-10).

Jessica Eadsforth-Yates had a best of 16 points on two occasions for Davis and Elkins (2-13) with the second coming in a 40-minute effort in an overtime defeat to Charleston.

Megan Sheret collected seven rebounds during February and then closed out her season with a best of eight points without a miss in a start against Dominican with Fresno Pacific (7-5) earning the PacWest NorCal Pod Championship.

Sadie Russell recorded a second double-double on the season with 13 points and 10 rebounds along with five assists before collecting a best of 12 boards in the next outing for Flagler (7-7). The senior forward recorded a 16-9-6 line in the penultimate game, and then finished with 15 points for back-to-back wins.

Cheyenne Scott got the start for Florida Tech (3-5) before contributing two points and five rebounds against Barry in a 78-65 success. Shawnisay Millar had 10 points in successive games for Midwestern State (11-7) and had a best of 12 points to close out the month before a loss in the Lone Star Conference Tournament.

Ladun Akako had a double-double fo Art U (3-4) with 13 points and 11 rebounds, against Fresno Pacific followed by another 10 rebounds in the next outing with a first start, while Jamella Sampson started February’s action with a season-high of seven points on 3-of-4 shooting for Northwest Nazarene (7-7)

Also, Hannah Dawson had four points and three rebounds during February as Texas A&M finished 11-5 on the season with a quarter-final exit in the Lone Star Conference Tournament. Dami Adeyinka put up a season-high of 16 points for Quincy (2-18) in a triple OT loss by a single point, while Anna Popovic had two points and five rebounds in 16 minutes for Tampa (4-0)

Kadija Conteh dropped 30 points as North Central University (18-4) earned a share of the regular-season title. The sophomore guard finished the season with a 28-point haul as NCU fell to a three-point defeat in the Conference Championship game.