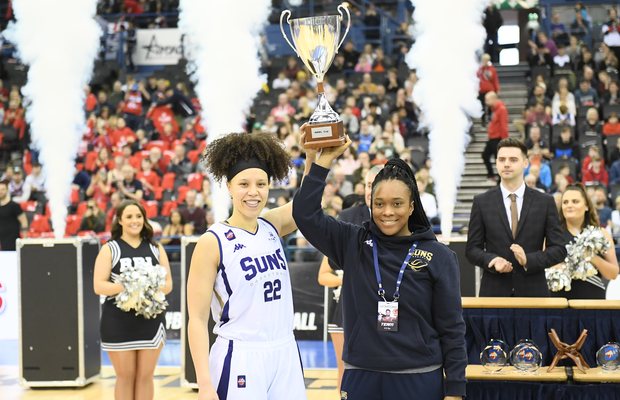 Sevenoaks Suns have opened their roster announcements with the key returns of Cat Carr and Ta’Yani Clark.

The influential duo have played an important role in the club’s recent success with the Suns winning seven pieces of silverware in three and a half years including a three-peat in the playoffs.

Carr was the WBBL league MVP in the 2017-18 season and has featured in the Team of the Year for the past three editions of the award.

The New Jersey native averaged 16.3 points per game in the league last season and is the WBBL’s all-time scoring leader since its inception in the 2014-15 campaign.

“I am a very lucky coach to have had these two for the past four years together,” said head coach, Len Busch. “They are both such great people who lead both on and off the court.

“This will be Cat’s eighth season with Suns and the amazing thing is she has improved every single year.

“Bringing her good friend Ta’Yani to Suns four years ago was one of my better moves and I really do owe them both a lot, so it’s extra special they will continue to represent the club for a bit longer.”

Clark has battled injuries during her time in the WBBL and made the switch to the Suns after a spell with Team Northumbria.

The Suns are off the mark for their 2020-21 roster reveal with more announcements expected this week.