R.J. Eytle-Rock is ready to join the Spectrum party - Hoopsfix.com

R.J. Eytle-Rock is ready to join the Spectrum party 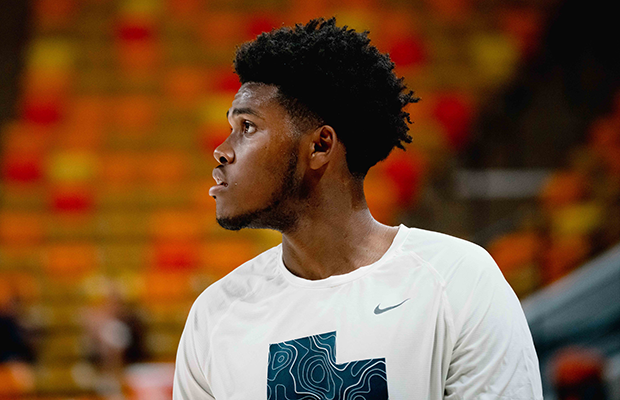 R.J. Eytle-Rock remembers the noise, even if it’s more than two years gone.

It was the semi-finals of the 2019 America East Tournament, and the then-UMBC freshman was backed by a raucous home crowd as his Retrievers won a win-or-go-home thriller against Hartford. The juiced atmosphere was something new for the first-year college player.

“It’s a packed house, it’s jumping. The crowd is going crazy,” he told Hoopsfix. “We’re up like 20 against Hartford and end up going to double overtime; it was one of the best games I’ve played in. We don’t really have crowds like that in London.”

To that point, Eytle-Rock said he’d been used to crowds made up of just handful of people at Barking Abbey basketball academy, maybe 50 if they were lucky. But one person in that smattering of people can make all the difference.

In the Spring of 2017 UMBC head coach Ryan Odom flew to London to watch forward Dan Akin play at Barking Abbey, a long trip that paid off as Akin signed with the Retrievers just a few months later. But while there, Odom also caught a glimpse of his younger teammate, and liked what he saw in Eytle-Rock.

The young guard would himself ultimately head to Baltimore to play for Odom, and is on the move again after a successful three-year career at UMBC.

Eytle-Rock followed his coach West this offseason, joining Utah State shortly after Odom took over the Aggies, and there are few better places a player that relishes playing in front of big, frenzied crowds could’ve landed.

The Spectrum magic is real.

Eytle-Rock’s new home — the Dee Glen Smith Spectrum — has been devastating to opponents in its 40-year history. The Aggies have won 80.9 percent of their home games over those four decades, including a 29-2 run over the past two seasons.

In 2019-20, the last season attendance wasn’t affected by the pandemic, USU averaged nearly 9,000 fans per game, packed into which was the creatively-renowned student section, The Hurd. 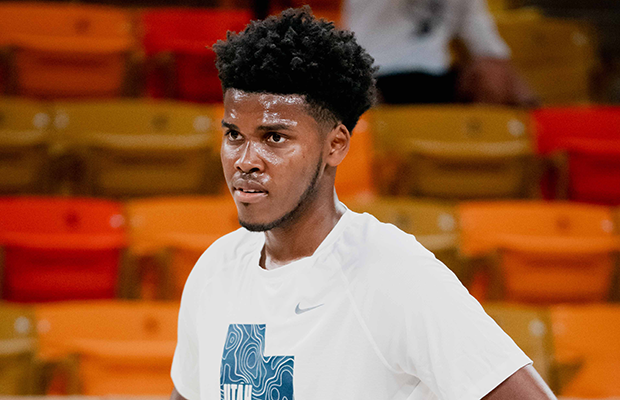 It’s an atmosphere that has spawned the shirtless antics of Wild Bill and that many credit with inventing the “I Believe That We Will Win” chant heard all around the U.S. Eytle-Rock is eager to hop into that noise.

“I’ve heard very good things about the Spectrum,” he said. “I heard it’s jumping every night and the students are great. I just can‘t wait to play in front of them.”

It was, however, in those quieter gyms back home that Eytle-Rock’s basketball story began.

He began playing the sport when he was eight, which was only natural. His mother, Ruth Eytle, is a youth basketball coach and following her around as a kid made it easy for him to fall in love with basketball.

He’d shoot around during breaks in her practices and join in with the older players at times, starting his career with London Greenhouse Pioneers, but it was when he was 16 and started playing at Barking Abbey that his career took its first big leap. That included taking home the 2016 Hoopsfix All-Star Classic U19 MVP award. 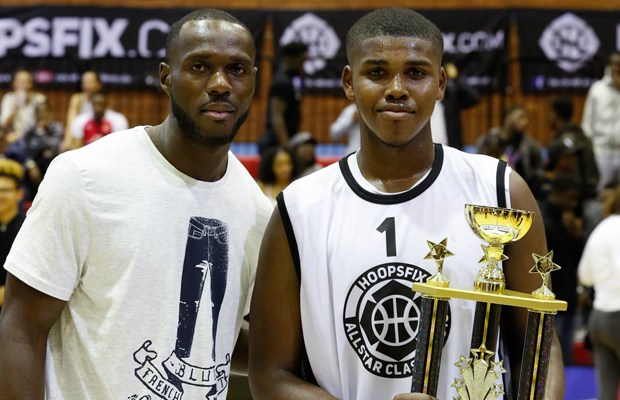 “I loved my time at Barking Abbey,” he enthused. “That was a great transition for me, they helped me out a lot, took my game to another level. Coach Lloyd [Gardner] has a lot of connections to America so they just gave me a platform to showcase my game.”

He joined up with Odom and then-sophomore Akin at UMBC ahead of the 2018-19 season after having spent a prep year in New Jersey. Those were heady times around the program, with the Retrievers just coming off their momentous first round upset of No. 1 seed Virginia in the 2018 NCAA Tournament.

Akin played 12 minutes in that historic win, but UMBC was left needing to replace its two best players in guards Jairus Lyles and K.J. Maura.

Eytle-Rock stepped into that backcourt void, where he played an immediate role as a freshman despite not taking the Junior College route many British players do before playing Division I.

He held his own even as he adjusted to the division’s size and strength, starting 24 games and averaging 5.1 points and 2.7 rebounds per game as he made the America East all-rookie team. In fact, he was the only freshman during Odom’s time at UMBC to average more 24 minutes per game. 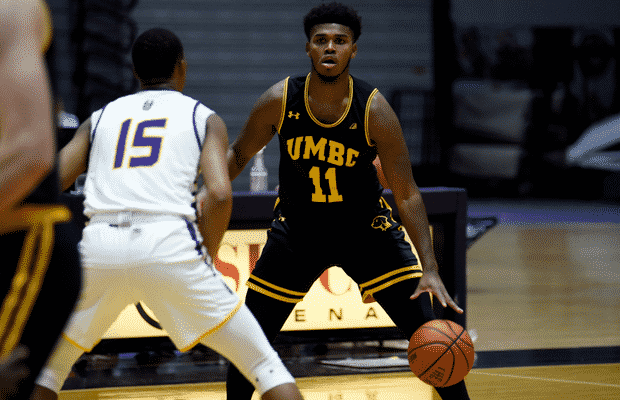 The Barking Abbey product, however, didn’t necessarily feel the pressure that first season.

“It was a different transition, it was kind of difficult at first just because you’re going up against older guys, guys that are bigger and stronger than you. Obviously in America basketball is your culture so it was different at first,” he said.

“For me coming in as a freshman, I didn’t really feel any pressure because no one really expects a freshman to be so involved right away. But I took it on the chin and was excited that I had a big role early on.”

His game only grew from there, to the point he was arguably the most important player on a Retrievers team that won a share of the America East regular season title this past year.

The former GB U20 was dynamic offensively, particularly as a pick-and-roll ball handler, in a junior campaign that saw him lead UMBC in scoring (14.3 PPG) and have his best season shooting from distance (40% 3FG).

Eytle-Rock was also there in the biggest games, such as the win against Vermont in the regular season finale where he scored 15 points and pulled down seven rebounds to help secure that share of the title.

The Retrievers ultimately didn’t reach the NCAA Tournament, and the offseason brought plenty of change.

Odom made the move that seemed inevitable since planting himself as a up-and-coming coach after the Virginia upset by taking over at Utah State, which prompted a number of transfers within the program.

That included Akin, who moved on to California Baptist after three seasons playing alongside his fellow Barking Academy product.

Eytle-Rock didn’t have to think hard about where his future would be. He, along with his teammate Brandon Horvath, followed Odom to Utah State, keeping him with a coach he says he trusts.

“[Coach Odom] and I have a good relationship, I feel like we’ve built up a lot of trust over the years. I was excited to continue playing for a high-level coach like him,” he said.

The senior, who is eligible immediately, remembers seeing Utah State at the 2019 Jamaica Classic and he came away impressed with the team’s talent even though the Aggies and Retrievers didn’t play each other. 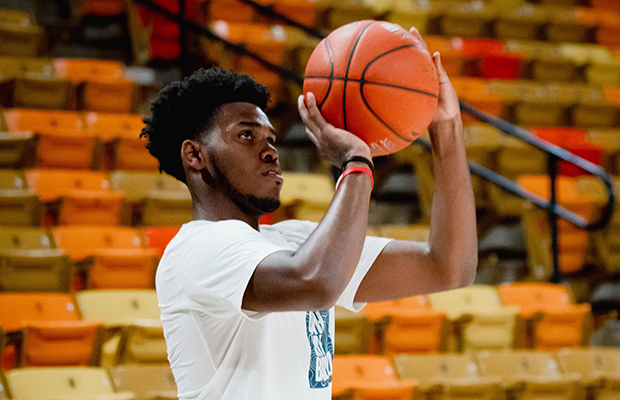 That version of the Aggies went on to win the Mountain West Tournament and would’ve played in the NCAA Tournament had it not been cancelled due to the COVID-19 pandemic. That’s where Eytle-Rock wants to go himself, and has been working hard in an offseason that saw him spend time back in the U.K.

“I’ve just focused on my three-point range, trying to extend that and also trying to get in better shape,” he said.

As always, he said he’s kept in touch with the other former Barking Abbey players playing college basketball in the U.S., like Montana State big man Jubrile Belo and Amin Adamu.

He says London is a small city when it comes to basketball, and he and his fellow Brits playing in America need to stick together.

Now that he’s at Utah State, he certainly has a chance to make a big impression in one of college basketball’s most exciting environments.