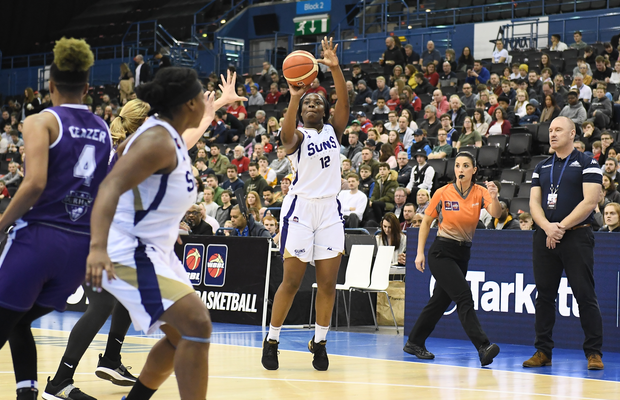 Monakana earned a Finals MVP award in each of her two seasons with the Suns having made the switch from Nottingham Wildcats in the summer of 2018.

The 25-year-old averaged 11.3 points and 4.1 rebounds per game in the league last season and has become a regular amongst the GB Senior Women’s setup.

Busch was the team’s second leading scorer in the league last season with 12.7 points per game, while Koppl averaged 8.2 points and 6.4 rebounds per game and Garrido-Perez posted 8.1 points per outing with seven starts in 13 appearances.

“Janice is a difficult matchup for the rest of the league since she’s fast, strong, can drive and can also shoot from deep,” said head coach Len Busch. “Her two Finals MVP awards are testament to her being a big game player.

“Renee has improved every year and I am looking forward to seeing her this season after a summer of hard work, while Julia has been a stalwart in the 4-5 spot for Suns for three years now. She always holds her own against every player in the league in her position.

“I also think Irene played really well for us last year, especially when Ta’Yani (Clark) was out after knee surgery and Haylee is a long time Sun, who can fill in for us in the frontcourt, giving us a bit of extra depth.”

The Suns roster grows to seven following the returns of Cat Carr and Ta’Yani Clark with more signings to come this week.