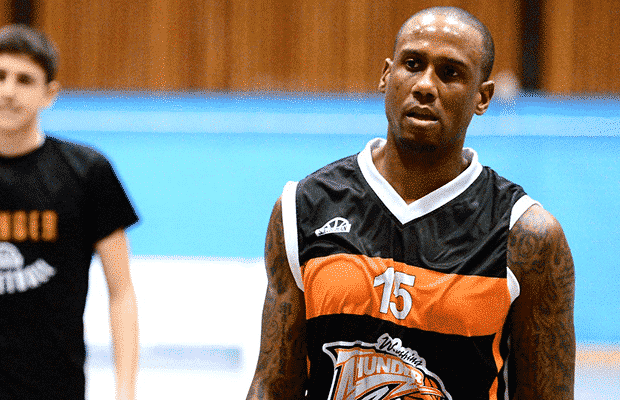 Former Worthing Thunder player and part-owner Alex Owumi, has been suspended from playing or attending all basketball in Great Britain for six weeks and fined £1,000 for betting offences in relation BBL Trophy games.

The British Basketball Federation, in conjunction with FIBA, were engaged with the Gambling Commission Sports Betting Intelligence Unit, the GB betting industry, and the IOC Olympic Movement Unit on the Prevention of the Manipulation of Competitions, to complete the investigation, announcing the punishment on Tuesday.

The statement read that the incidents took place in January 2020 and involved betting on handicap markets on a game involving Worthing Thunder, for the opposition to win a BBL Trophy game, as well as betting on another Trophy game in the same competition.

A source close to the situation has told Hoopsfix the primary offence was for Worthing’s game against Manchester Giants in the BBL Trophy, which Worthing won 88-84. Owumi led Worthing in scoring with 22 points – 19 in the first half – adding 7 rebounds, 1 assist, and 1 steal and 3 turnovers, playing all 40 minutes.

The other game was not a game involving Thunder, according to the source.

The suspension will begin from the commencement of the 2020-21 season, with dates currently remaining undetermined due to the coronavirus pandemic.

Owumi – who retired at the end of this season – was given the opportunity to appeal but chose not to take up the option, taking to Twitter the same day to say “Y’all know me. Please don’t believe that mess.”

The American played in the BBL from 2012-2018, suiting up for Worcester, London and Surrey before making the step down to Worthing ahead of the 2018-19 season to re-join former teammate and close friend Zaire Taylor who took ownership of the club.

He is well known for his book ‘Qaddafi’s Point Guard’ recording details of his experiences playing in war-torn Libya.

Meanwhile, his Worthing Thunder teammate and co-owner Taylor released a video statement on the club’s YouTube channel on Wednesday.

Taylor showed his support for Owumi whilst making it clear he does not condone betting on basketball games but did point to the low salaries for basketball players in the UK saying “you shouldn’t be able to bet on a game and make more than you make for the season”.

The full Taylor statement was as follows:

“First and foremost, Alex is a friend, Alex has done a lot of things for me,” Taylor started.

“…His punishment has been dealt out by other parties, as far as if there is or isn’t a punishment or any kind of response as far as Thunder, that will all be dealt with in-house, I don’t think that has to be for the world.

“We’ve worked extremely hard to put out an amazing product and I just hope that everyone that has attended a Thunder game feels so and appreciates that and that has to go without saying.

“On another note, first I do not condone players betting on basketball games. I can say it a million times, I don’t want that to be misconstrued in anything I can potentially say but one thing I do want to say is we all have to improve. Me being a player, in management, in ownership, I’ve worn all the hats in some capacity or another, and I’m speaking to myself as much as everybody else; we all have to be better and create an environment where these things won’t happen.

“This is not talking about Alex anymore, this is just talking about sports betting and the climate of the country. If you think about the 4-5 years i played in the premier league (BBL) in this country, if you can have a starter below the poverty line, he’s averaging say 10 points and he’s making £300 pounds, or just well below the minimum wage or just have your housing paid for or any of this.

“That’s not a shot at anybody because I’m in ownership, and I want us to do better, but you have what you have, you got what you have to work with.

“It’s a tough dynamic. I feel like we need to create an environment where players…you shouldn’t be able to bet on a game and make more than you make for the season. That’s kinda crazy.

“I think we need to fix that, address that, we need to address wages improving, that comes with more sponsorship, more promotion and everything else. I just want to be pushing the scale forward, I want things to be improving in this country and I’m not saying they haven’t since I been here, they definitely have but it’s a tricky situation.

“Last thing I want to say with Alex, I’ve won 3 championships with him, 2 in the BBL, 1 in the NBL, one thing I can say about him is he’s a competitor, there are times when we’ve been ready to fight over games that didn’t mean anything in practice, to when we played against each other we wanted to fight.

“I know the competitor he is, and I hate that idea – everyone that’s read his book knows the things he’s been through – it’s unfortunate that his character can now come into question with some of the things that he’s achieved.”

FIBA, as the World Governing body, have the right to impose further sanctions under its regulations.