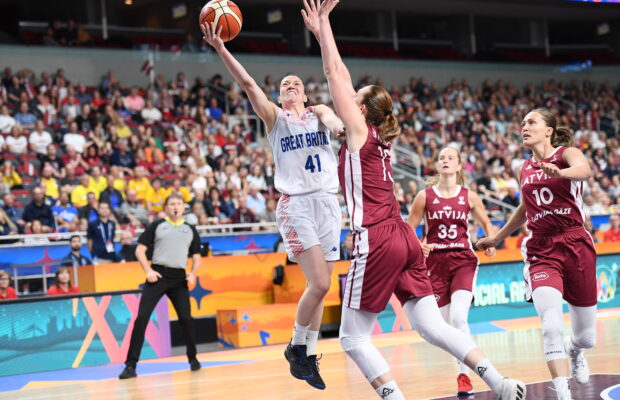 Great Britain’s Senior Women made the perfect start to FIBA Women’s EuroBasket 2019 and head into their next challenge full of confidence.

A convincing 74-60 success over hosts Latvia in Riga puts Chema Buceta’s side in an early strong position to advance with the reigning champions Spain awaiting tonight.

Jo Leedham starred with an inspired all-round effort of 24 points, six assists and seven steals, but it was a strong team effort and Eilidh Simpson was delighted with the winning start.

“It was a great first win to get under our belt,” she told Hoopsfix. “It was a battle for all 40 minutes, but we quickly have to forget this game and focus on Spain.

“Every single person that went in contributed and it was a good start for us.

“Joey fought the entire time she was on the court – an absolute warrior. Rach (Vanderwal) handled the pressure well, Karlie (Samuelson) hit some really tough shots and it was just a great team effort.”

H A P P Y B I R T H D A Y to the one that’s always by my side! Let’s get that W tonight against Latvia and make it one to remember! ❤️❤️

GB knocked down 11 threes in the victory with their opponents held to 4 of 19 from beyond the arc as their outside shooting helped them pull away in the contest.

“We know we can hit our outside shots, everyone can hit them so it’s something we look for,” said Simpson. “Georgia (Jones) came in and hit a big one, Chan’s (Handy) capable of hitting multiple, Karlie is capable and Jo was throwing them up tonight and they were all going in.”

The focus, as Simpson said, quickly switches to Spain. The world number two ranked side and 2017 winners of the competition opened their campaign with a 95-77 win over Ukraine as Marta Xargay poured in 31 points to help her side cancel out a 38-point haul from Alina Iagupova.

And it was Xargay who buried GB at the death in Fuenlabrada last week as La Roja escaped with a 67-65 triumph with GB proving to the whole of Europe just how competitive they can be.

The big challenge will obviously be doing it again. Victory would secure a place in the quarter-finals for the first time in GB’s history in the competition, and there would not be a bigger statement made.

“We have another 40-minute battle ahead of us,” says Simpson. “They know us, we know them. Obviously we learned a lot from the game in Spain. We just need to make sure each game that we progress and keep going forward.”