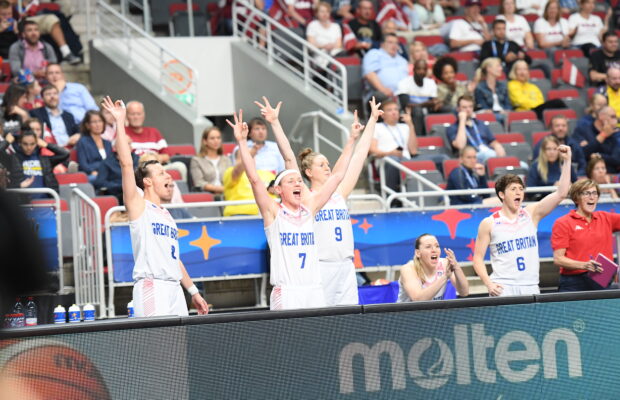 Great Britain’s Senior Women opened their EuroBasket Women campaign in style with a convincing 74-60 victory over the tournament co-hosts, Latvia, in Riga on Thursday evening.

Chema Buceta’s side get off to the perfect start to continue their momentum carried over from preparation and head into tomorrow’s showdown with Spain full of confidence.

Jo Leedham produced an incredible display to finish with a game-high 24 points along with six assists and seven steals to lead from the front.

Karlie Samuelson weighed in with 15 points on her tournament bow with Temi Fagbenle battling away in the paint to put up 13 points and grab 10 boards for a double-double.

After conceding the first four points, Leedham settled GB with an and-1 to spark an 8-0 run. They soon caught fire shortly after with the trio of Karlie Samuelson, Janice Monakana and Leedham all connecting from downtown to pull away to a 19-11 advantage.

Another three from Leedham helped GB lead 24-17 after 10 minutes and the CCC Polkowice forward moved to 16 points early in the second as the gap hit double figures.

The hosts were dealt a blow with Kristine Vitola carried to the locker rooms, and would return on crutches with an apparent lower leg injury to somewhat de-rail the momentum of a 7-0 finish to the half as GB’s lead had been cut to 41-39.

The game was soon tied at 47-47 early in the third, but the outside shooting tandem of Samuelson and Leedham was prominent once more in a 16-0 run with the defence standing firm to seize control of the contest.

Rachael Vanderwal’s drive and finish to beat the buzzer on her birthday made it 65-49 heading into the final period with GB seemingly set to repeat their victory over Latvia from six years ago in the 2013 edition.

Despite passionate home support, they were unable to inspire an improbable comeback and GB continued to keep their opponents at bay on their way to completing an impressive opening victory, controlling the tempo in the fourth.

A much stronger test awaits on Friday evening in the shape of reigning champions, Spain, but last week’s friendly in Fuenlabrada helped serve as an indicator of how competitive GB can be.

Notes
– GB’s starters were Vanderwal, Samuelson, Handy, Leedham and Fagbenle
– Captain Stef Collins reached 150 in caps for GB
– GB started 4 of 6 from 3-point range and ended up 11/26
– GB have never reached the last eight in three previous attempts
– Spain defeated Ukraine 95-77 in the other Group A encounter on Thursday