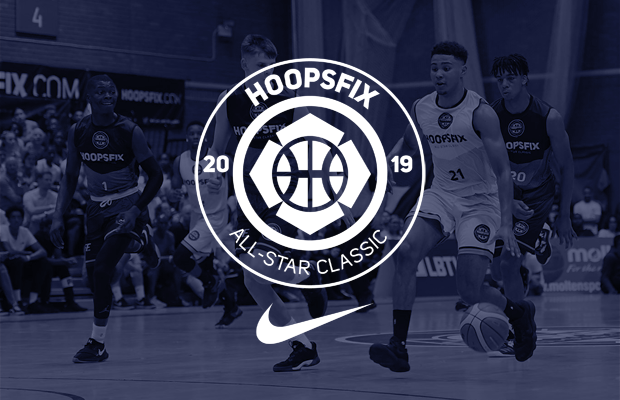 The rosters for the 2019 Hoopsfix All-Star Classic Underclassmen game have been revealed, featuring some of the best up and coming junior talent in the country (Buy tickets).

With a wealth of international experience, the game – tipping off at 2pm on Sunday June 2nd in Brixton – will shine a spotlight on players who have at least one more year of eligibility before heading to university. Click here to buy your tickets now!

Great Britain Under-18 and Deng Camp #2 ranked player Tomiwa Sulaiman will lead Team Black, making his Hoopsfix All-Star Classic debut as he returns to the UK from West Nottingham Academy in the US.

6’9″ Ethan Price, fresh off a breakout season with Copleston where he picked up EABL South Conference MVP and Defensive Player of the Year, returns for his second year in the event but this time with the recognition of being one of the top players in his Class having come in last year as an unknown.

He will be joined in the Team White front court by a pair of GB junior internationals in the towering 7’0″ Theo Hughes from Barking Abbey, and  6’8″ Sam Grant after completing his first season with John Madejski Academy and Reading Rockets.

Franklin Agu represents Haringey Hawks after their dominant year, having scooped up National Cup and ABL Finals MVP this season and Great Britain Under-16 Veron Eze returns to the Classic for a second consecutive year having made the All-EABL Second Team in the Southern Conference with Copleston.

The Team Black frontcourt will be stacked with Myerscough and Ireland big man Sanmi Fajana, his Myerscough teammate and GB junior international Amari Williams, who returns after being the youngest player to suit up in the Classic last year, and then Charnwood’s 6’9″ Ethan Damerum who is fresh off manning the middle on his way to an EABL national title.

Great Britain Under-16 Saul May will also make his debut with the versatile Manchester guard/forward completing a strong roster.

On Team White, turning 16 just a week before the Classic, Itchen phenom Jeremy Sochan will star as the youngest player in the game, giving a glimpse into the future as one of the highest touted prospects to come out of the UK in a while.

He will be joined by JMA’s second representative in the game as David Chive suits up having made the All-EABL Second Team in the Southern Conference.

Sussex Storm’s Cameron Hildreth will make his debut in the Classic, with the Great Britain Under-16 having just come off a dominant Junior Final Fours which saw him register a 48 point outing in the championship final.

His GB U16 team-mate Josh Uduje was the team’s second leading scorer in Sarajevo last summer and the recent NBL Division 4 Men’s Playoff Final MVP, while Pharrell Wallace-Steel returns from Germany, where he signed with Ratiopharm Ulm ahead of the 2018-19 season, to compete in the Classic.

Richmond’s long-limbed Ridley Shema suits up as an under-the-radar prospect, having just helped lead his squad to the Under-16 Final Fours and poised for a break out season next year.

EABL National Champion with Charnwood, Blaize Sagna, will wear the White Jersey after averaging just shy of 15 points per game in making the All-First Team in the Northern Conference.

Sam Alajiki will make his debut, having turned heads with his potential this season with Canterbury in the EABL and Derby’s athletic Blake Bowman comes in having been second best in the EABL for efficiency for first year players whilst also seeing minutes in NBL Division 1 Men.

Tickets to the 2019 Hoopsfix All Star Classic are still available but selling fast, starting at just £5. Click here to buy now before they are all gone!

The Class of 2019 game rosters and coaching staff for all teams will be announced in the coming days.