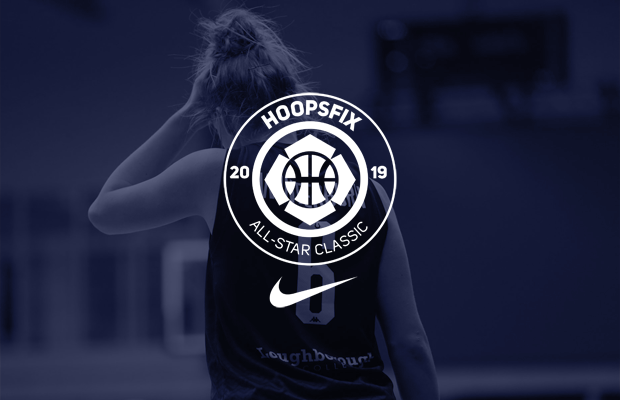 The rosters for the inaugural Hoopsfix All-Star Classic Under-19 Women’s game are now confirmed with a number of future stars of the female game set to feature in Brixton next month.

24 players have been selected to take part in the 2019 edition of the Hoopsfix All-Star Classic on Saturday 01 June tipping at 4pm, with tickets available HERE.

Holly Winterburn will lead Team White ahead of her highly anticipated move to Oregon University later this summer having just been crowned WBBL Young Player of the Year for the second year running as Leicester Riders make it back to The O2 Arena for the Play-Off finals, and picking up the WEABL North Conference Most Valuable Player Award.

GB Under-20 international Loren Christie will line up alongside Winterburn after having another solid year in the WBBL, while BA London Lions team-mate Macy Spinks will be in the back-court having closed the regular season with a best of 26 points.

Fast-rising star and WEABL South Conference Defensive Player of the Year Esther Little will be leading the way for Team Black with the GB Under-18 forward producing another strong season as the second leading scorer in the WEABL behind Winterburn. Copleston team-mate Cameron Taylor-Willis joins Little and matches up inside against fellow GB U16 Lilly Annim.

Lauren Saa and Maya Hyacienth will suit up together for Team Black having both signed at Rider University for next season. Saa is also joined by three Charnwood team-mates in Caldwell University bound Imogen Cook, Rebecca Morrison – also headed to Caldwell – and Megan Jones, who was named MVP in their WEABL Championship victory at the start of April and is heading to NCAA Division 1 school UC Davis next year.

There will be an exciting back-court duel between a quartet of CoLA players with former GB U18, WEABL South Conference Most Valuable Player and Charleston signing Megan Haines and Loyola Marymount commit Esther Oluade on Team White going up against GB U16 internationals Ashana Hinds – signed to Central Arizona College for next season – and Amelia Sandie. Another product of the school in Mia Jaye Sarkodee-Adoo helps strengthen the front-court for Team Black before she heads to Portland Concordia next year – with six CoLA representatives in total.

Speedy BA point guard Teresa Da Silva, heading to Northwest Florida State College next season, is joined by GB U16’s Jade Mbam to round out the Team Black roster. Nottingham’s Brahe Ashton, heading to Georgia Southwestern next year, will be in opposition in the back-court for Team White alongside Scotland’s Alix Henderson, who had two years on the GB U18 roster and is heading to Point Loma University next season.

Holly Wright, heading to Hillsborough Community College next season, will play for Team White to also take the number of Charnwood players to six in the game with another Nottingham prospect in Shaniya Rose featuring, while GB U16 forward Pollyanna Storie and Myerscough’s Kyra Smith – heading to Tallahassee Community College after being named WEABL Defensive Player of the Year in the North – complete the roster with strength in depth on both lineups.

Coaches will be announced in the coming weeks. Join the Facebook event here to be kept up to date of future developments and join the conversation using the hashtag #HASC19.

Tickets are moving fast, buy yours now by clicking HERE!