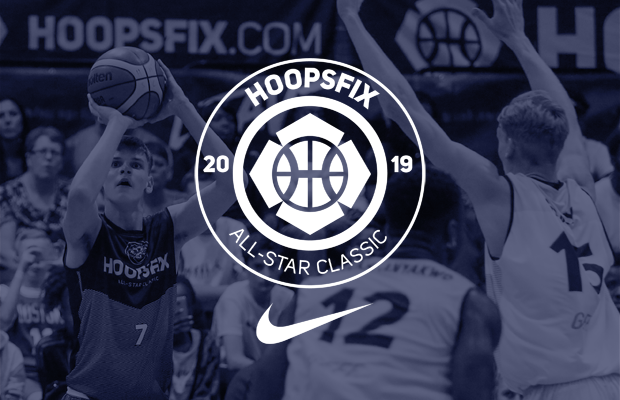 The rosters for the 2019 Hoopsfix All-Star Classic Class of 2019 game have been revealed, featuring a number of the top young basketball prospects in the country (buy tickets).

With countless national titles and a wealth of international experience between them, the game – tipping off at 4pm on Sunday June 2nd in Brixton – will shine a spotlight on players who are heading to university next season. Click here to buy your tickets now – we are well on track to sell out with approximately 50 tickets remaining!

In a testament to the level of talent on display, 12 of the 24 players have already signed for athletic scholarships in the US next season, with others sitting on offers and yet to make their decision.

Heading up Team Black will be Deng Camp #1 ranked player and Drexel signing Mate Okros out of Myerscough, he will be joined by the reigning Hoopsfix All-Star Classic dunk champion Jonathan Brown out of Barking Abbey, who is Fresno Pacific University bound for next year.

Brown’s Barking Abbey and former GB 3×3 teammate Robin Bedford, will join him on Team Black, along with Alec Reed Academy’s versatile Elias Poorman, who is All-EABL First Team this season after last year saw him win an ABL National championship whilst winning Defensive Player of the Year.

Scotland Senior representative Callan Low out of Myerscough rounds out the guards for Team Black, as the GB Under-18 was Scotland’s youngest player at the 2018 Commonwealth Games, having been Scotland Under-16s’ leading scorer at the European Championships in 2016 having also committed to Newbury College.

The Team White backcourt will be led by EABL North Conference and Finals MVP Niall Harris, fresh off a national championship with Charnwood, along with last year’s Hoopsfix All-Star Classic Underclassmen MVP and All-EABL first team member Ade Adebayo from Barking Abbey, who is UC Davis bound next season.

New City College’s long-armed Aaron Badibo makes his long-awaited Hoopsfix All-Star Classic debut, after dominating the ABL in the 2017-18 season picking up conference MVP and Defensive Player of the Year awards and turning heads at Deng Camp. Sharp-shooter Pierce Maslen returns to the Classic for Team White after a prep year at Sun Live Basketball Academy in Portugal as the former England junior international continues to weigh up his options for next year.

It will also be a Classic debut for Itchen’s Rhys Sundimalt after a breakout third year on the coast, as he joins Team White, along with Charnwood’s Joe Bielak, who is fresh off a National Championship, to add to his Under-18 National Cup title, and two Haris Tournament titles.

Moving onto the Team Black front court, Wesley Oba returns to the UK for his Classic debut after a third year in Portugal at Sun Live Basketball Academy under former GB U20 assistant Josh Merrington, as he prepares to head to the US to Sioux Falls next season.

Patrick Lanipekun returns to the Classic after a prep year at CoLA for Team White, where he has signed to CCSU for the 2019-20 season, whilst JMA’s Arinze Emeka-Anyakwo, who is University of Regina-bound for next year, joins Team Black.

Canterbury’s Milo Gordon, who rounds out the Deng top 20 rankings, makes his Classic debut with Team White, having locked in the EABL Most Improved Player award in the South this year and making the Second team, being opposed by Itchen’s Matt Hughes on Team Black who returns to the game after helping Itchen to the second best record in the EABL South.

The athletic Abdul Wurie is Oaklands’ sole representative in the game, suiting up for Team White having a stand-out season with the side whilst also having represented with Westminster Warriors in NBL Division 2.

Rounding out the Team Black frontcourt, the well-decorated Charnwood big man Hosana Kitenge will man the middle, as the GB Under-18 returns to the Classic, along with his GB Under-18 teammate CJ Hayden, fresh off an ABL Conference MVP season with Aston Manor, and Myerscough’s Sam Keita – heading to Casper Community College next season – who makes his debut after completing his third year in the North West, originally out of CoLA.

And rounding out the Team White frontcourt, a third Sunlive representative in Zak-Blue Shagourie, who is University of Southern Arkansas-bound for next year, will suit up, along with Barking Abbey’s Nathaniel Powell who returns to the Classic for a second consecutive year, and Itchen All-EABL Second-team member Peter Turay, who has signed with Lamar Community College for next year.

With the all the male players on the day across both games having now been revealed, 19 of the current Deng Top 20 ranked players are suiting up.

Check out the Underclassmen game rosters HERE as well as the squads for the Under-19 Women’s game HERE.

Tickets to the 2019 Hoopsfix All Star Classic are still available but selling fast, starting at just £5. Click here to buy now before they are all gone!