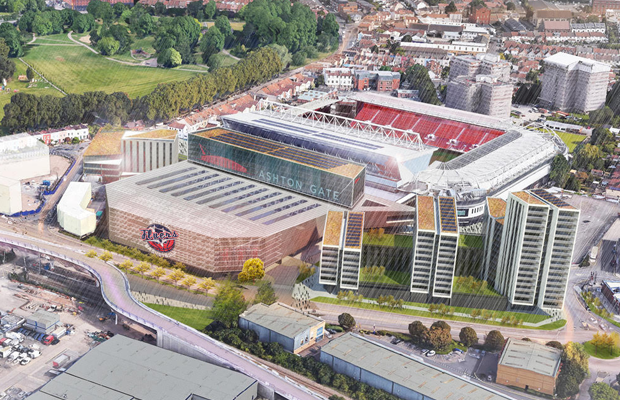 Bristol Flyers basketball club has today revealed comprehensive plans for a new 4000-seat venue as part of a £100m development to extend the footprint of Ashton Gate Stadium.

The centrepiece of the proposed development is the Ashton Gate Sports & Convention Centre which will provide a permanent home for Bristol Flyers. The proposal includes additional housing, offices, a multi-storey car park along with two hotels.

Based upon the timescales for Phase One of Ashton Gate’s redevelopment, it is expected to be a 3-4 year process until the venue is completed and ready to use.

BASKETBALL IS COMING TO BS3! 🏠

“This is a tremendous moment for Flyers basketball and one which will secure our long-term future. We’re entering our fifth season in the British Basketball League and we have built our reputation both on and off the court.

“Last season’s sell-out crowds at SGS College have shown us that there is a real appetite for basketball in Bristol and it is wonderful that we can now look forward to playing in a brand new venue in the next few years, which will support our long-term ambitions for domestic and European success.” 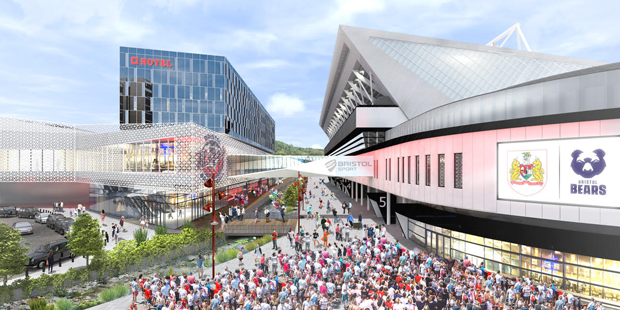 “We are pleased to be able to reveal these plans. It has been more than two years in the planning to ensure that Phase II of Ashton Gate’s redevelopment into a city quarter focused on sport and entertainment was indeed viable, sustainable and most importantly achievable.

“Following the successful £45m transformation of Ashton Gate Stadium, on-time and on-budget, it was always the aspiration to develop it further to give our basketball team, the Flyers, a permanent and secure playing home, right here in BS3.

“The Flyers sold out every home game of the 17/18 season, and this new facility will provide their pathway to sustainability. The new Sports and Convention Centre will also provide much needed space for the growth of a broad range of community based sports, run by our group of charities based at Ashton Gate.

“It is right that any proposed development must take account of the current housing crisis facing our city and homes have been factored into the plans. The need for south Bristol to have effective public transport is also crucial and we hope that by proposing investment into an integrated transport hub to connect the Metrobus; the railway line; cycle routes and crossing sections over the Winterstoke Road, that this proposed development will significantly improve the transport flow around the area.

“The last two years have seen a successful regeneration and stimulus to the BS3 area. As one of the city’s largest employers we are proud to have kept true to our promise of delivering a stadium in the heart of the city, with local suppliers and a local workforce. This has had a significant economic impact on the fortunes of many local residents and businesses and we hope that by committing to this next phase that the whole of Bristol will reap the benefits.”

The Flyers venue becomes the latest new basketball facility on the horizon, as we recently asked the question if the UK is getting closer to solving the issue. Newcastle Eagles’ arena is currently under development, whilst Manchester Giants will have a new home from 2019, plans for Sheffield Sharks’ new home are well underway, along with Cheshire and Plymouth considering their options. Additionally, it has recently been revealed Sevenoaks Suns are to get a purpose-built venue at The Olympic in Swanley.