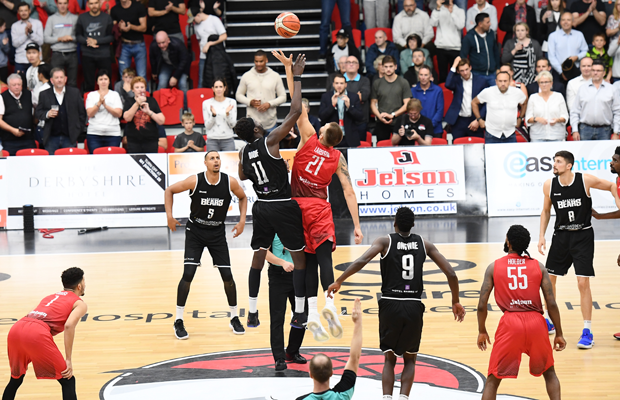 Leicester Riders’ were unable to overcome Bakken Bears in their Basketball Champions League debut, falling 90-77 on Thursday evening in Leg 1 at the Leicester Arena.

Riders became the first senior British club to compete in European competition in 12 years, and it marked a return for them for the first time since the 1991-92 season where the Riders faced Spanish powerhouse CB Zaragoza in the first round of the second tier Korac Cup.

However, significance of the moment aside, the result did not go their way, as the Danish champs led from start to finish, putting 49 points on the board in the first half and having an answer for every Riders rally.

“It was a great experience for us, no doubt,” Riders Head Coach Rob Paternostro told Hoopsfix. “They’re a really good team, you saw their experience tonight. They’re really tough to contain, they really jumped on us; 49 in the first half.

“They have a lot of weapons but I thought as the game went on, we battled. We could’ve had a much bigger deficit than we have, so now we have to figure out a way to slow them down in Game 2. We know it’s going to be a challenge but as you can see, our guys are going to fight right until the end.”

DeAndre Burnett – after just three practices with Leicester – put up a quick 24 points to lead the home side, whilst JR Holder was the only other player in double figures with 11 points.

And despite hanging around in a high-octane first quarter, Bakken asserted their dominance in the second period, winning the quarter by 11 and capitalising on an unsportsmanlike foul to hold a 14 point lead at half time.

The lead ballooned to as many as 23, as Bakken appeared to be in cruise control throughout.

“It’s not what we wanted but we clawed it back from 20 down which gives us a chance going back over there,” Riders’ Andy Thomson said.

“We know where we made our mistakes, we’re going to look at video now and rectify that and take it one period at a time.”

Hayden Dalton led Bakken with 17 points, whilst Ryan Evans and Michel Diouf added 16 each. Bakken featured former England Under-18 and Great Britain Under-20 Ryan Martin, who finished with 6 points, 2 rebounds and 2 assists as he was limited by foul trouble.

“We played ok, we can play a lot better than we did but it’s good that we got the win,” Martin told Hoopsfix after the game. “We got a second leg at our place and we’re looking to really turn things up there.”

And despite being on the opposing team, Martin believes the Riders making a foray into Europe can only be a positive thing for the British game.

“It’s huge man. To start of with the Basketball Champions League is a big thing just for the culture and hopefully we can get more teams competing in competitions like this. It boosts the country and brings more publicity to the country. It’s a great thing.”

Riders flew out to Denmark Friday morning for the second leg, which will take place on Saturday night.